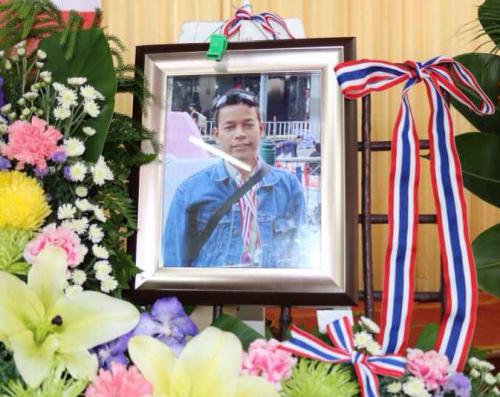 PHUKET: It has been a month since Phuket taxi driver Prakong Choochan died at the age of 46 from injuries sustained from an explosive device thrown at protesters in Bangkok.

His widow, Tippayao Choochan, vowed to continue supporting the “Bangkok Shutdown” protests after his death, and was in the capital last week to join the rally (story here). However, she returned to Phuket before the most recent clash between protesters and police that left five dead (story here).

“Since the conclusion of my husband’s funeral last month, I have joined the protest in Bangkok once. I went up last Friday and stayed for two days. I really enjoyed being there and feeling the spirit. It reminded me a lot of my husband,” she said.

“If he was still alive, he would be up there now.”

“Every time Suthep called for people to come, he joined them. My husband desperately wanted the right things for the political system in Thailand,” she said.

Mrs Tippayao has no immediate plans to return to the capital.

“I don’t know when I will join them again. I have to take care of my children in Phuket. Maybe sometime during the school breaks,” she said.

Meanwhile, Raywat Areerob, a Phuket MP until the House was dissolved last December, expressed his concern about islanders who have gone to Bangkok to protest (story here).

“A lot of Phuket people are joining the Bangkok protest. They all have the same opinion about the government,” he said.

“I’m worried about everyone there. However, I know they are willing to go and take a stand against the government. I know they are not afraid of anything. I hope they stay safe and bring victory back to Phuket.”