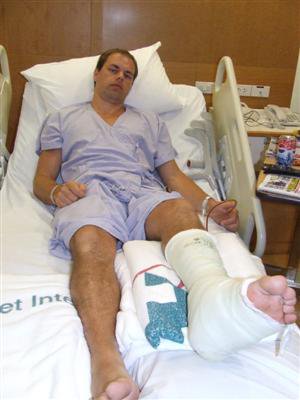 PHUKET: The owner of an elephant that recently went berserk and injured two Swedish tourists has defended the beast, blaming its mahout for the incident.

Trin Khanwilaikul, owner of ‘Camp Chang’ in Kalim, said the elephant named ‘Captain’ would not be punished for the rampage, which also damaged a car.

“He is a nice elephant, but he had the wrong mahout. It is like a car being driven by someone other than its owner,” she said.

Captain, a 20-year-old bull, is one of seven elephants owned by the camp. Only two are males.

On the afternoon of January 25, Swedish tourists Gustav Carlsson, 31, and John Haraldsson were riding Captain at the camp.

Mr Carlsson’s newly-wedded wife, 31-year-old Hanna Agnarsson-Carlsson, and the long-time couple’s 10-year-old son Oscar were on another elephant. Mr Haraldsson’s wife and four-year-old son were on a third.

All were part of a large party of Swedes who attended the Agnarsson-Carlsson wedding in Phuket the day before.

Mr Carlsson said Captain’s mahout had been poking the bull’s head and neck with a sharp stick for 20 minutes prior to the incident.

The elephant seemed to be getting angry, he said.

When Captain stopped moving, a mahout on the elephant behind fired a slingshot at his bottom.

With this, Captain went berserk.

The raging bull grabbed a tree, pulling it down onto a car. “We were shocked and very scared. We thought we would get killed.”

The two tourists managed to get off Captain’s back by grabbing an overhead cable and jumping onto the car below.

“We jumped off the car. Suddenly the elephant rolled the car over before stepping through its window.

“Then he turned to us. While we were trying to run away I realized I had hurt my left foot. I’m not sure if the elephant stepped on it and broke the bone.”

With a bone protruding out of his left leg, Mr Carlsson managed to make it hopping on one leg into a nearby hut, where the rest of the party were already hiding.

Terrified, the group cowered in the hut while the elephant continued its rampage.

“The bad stuff lasted about 15 minutes,” Mr Carlsson said. “I heard the elephant was back to normal about 30 minutes later.”

“My son saw the whole thing. He was very scared and was crying a lot. Luckily my daughter wasn’t there,” he said.

Mr Haraldsson flew home to Sweden on January 27 for treatment on his bruised knee.

Mr Carlsson was treated at Phuket International Hospital for a broken left leg and bruised heel.

“SOS International Hospital from Denmark will pay for everything, including the treatment and my flight back to my home town,” Mr Carlsson said.

The family is scheduled to fly back to Sweden today.

“I think we’ll come back to Thailand, probably in the next three to four years. But we’ll never ride an elephant again for sure,” he said.

“We asked the camp for some compensation. They gave us the money for the trekking back. But it’s not so much compared to the cost of treatment, which is very expensive,” he said.

“I’m not sure if we’ll ask for more money from them,” he added.

On Tuesday two people from the camp visited Mr Carlsson, presenting him with a bouquet of flowers.

She complained that the media had focused its attention on this particular incident.

“Other places have had much worse accidents than us,” she said.

“Why were they not published? One tourist even died while on an elephant trek, but I can’t say where.”

From Phuket to California by kayak