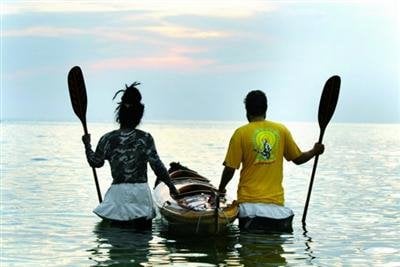 PHUKET: Two Phuket kayakers are getting ready for a spot of exercise: the world’s longest paddling expedition, a 14,000-mile voyage from Phuket to California in a 20-foot wooden boat.

American Ryan Doran, 26, and Phatum Thani born Piya ‘Mr X’ Sukunthai, 28, plan to leave Nai Harn Beach on March 10 – and they won’t be back for a while.

During their paddle, which they expect to take 20 months, they will pass through Indonesia, Malaysia, the Philippines, Taiwan, Japan and Russia before braving a 217-mile leg across the Bering Sea, one of the world’s most treacherous expanses of ocean.

If they successfully make the crossing, they will continue on to Alaska and Canada, and the lower 48 US States.

If all goes according to plan, the pair will port in Ryan’s home city of San Francisco, California, a few pounds lighter and just in time for Christmas next year.

Their own parents have branded their trip ‘crazy and dangerous beyond belief’, but for Ryan and Mr X the adventure is a life-long dream.

Currently in training, they can be seen most days paddling off Nai Harn Beach, and Promthep Cape in their Phuket-made kayak, Say-Lee (liberty).

Some sea kayakers have paddled sections of Ryan and Mr X’s planned voyage – but no one has ever gone the full way.

Hypothermia and huge waves will be their main concern when navigating through the South China and Bering seas.

The first to paddle across the Bering Sea was Jon Turk and his team, who completed the feat in 2000.

Turk’s team had to contend with 20-foot waves, navigate through ice shelves and withstand nine long days of sub-zero temperatures and zero visibility shrouded in a blanket of fog. They survived and the crossing is still heralded today as one of the world’s greatest-ever kayaking expeditions.

Ryan and Mr X claim they will be able to paddle the 217 miles through the Bering Sea in under two weeks’ time. A safety boat will tail them on this leg of their voyage.

“If we capsize in those conditions it will be extremely difficult to flip it back over, and huge waves and hypothermia are a very real threat,” Ryan said.

Ryan said the pair are paddling for themselves; not to break records, but to quench their appetite for the ultimate adventure.

“This is our adventure, and it’s what we want to do with our lives,” Ryan said.

Expecting to paddling anywhere from 20 to 50 miles a day, the pair will sleep in shifts. They say they can store enough food for one hundred days and enough water to last two weeks.

Food supplies of pasta, rice, and Spam will be used as a last resort, he said.

“We will fish every day for crabs, squid and other morsels,” Ryan said.

“Mr X is also bringing his slingshot in case any bird lands on our kayak….we’ll bring a spear gun too.”

The pair have been planning the trip for two years. Relying on internet maps, they say they have ’90 percent’ of their landing points mapped and have been tirelessly studying advance weather forecasts.

International visa applications, organizing a support vessel for the Bering Sea leg, raising money for their two GPS and marine radios has all taken time.

Earlier this month, the pair dispatched winter clothing and equipment needed to their ‘land support’ contacts in Japan and the Philippines.

They arrived in Phuket four months ago in preparation for their 20-month paddle.

Ryan, who has been kayaking since he was nine-years-old, arrived in Rayong Province in 2005.

Working there as a tour guide and wake board instructor, he met and became close friends with Mr X.

Mr X , an avid kayaker since the age of 14, said pirates and huge waves were a concern, but not a deterrent.

“We will not give up on our journey, no matter what,” he said.

Their kayak Say-Lee, cost US$7,000 and was handmade in Phuket by a Hawaiian craftsman.

“Say-Lee is durable and light yet strong,” Ryan said of the 38-kilogram vessel.

“Fiberglass would be 15 to 20 pounds heavier and we don’t need excess anything on our trip.”

As their departure date draws closer, Ryan and Mr X are preparing themselves both mentally and physically for the trip: Meditating, paddling 15 miles a day and rounding up supplies and a sail rigging system to aid them on their incredible journey.

Ryan and Mr X are still looking for additional sponsors for their trip. So far, John Harris from Chesapeake Light Craft (CLC) Boats and Bennet Bar from the NRS Kayaking Team are official sponsors. The Phuket Gazette is a media sponsor.