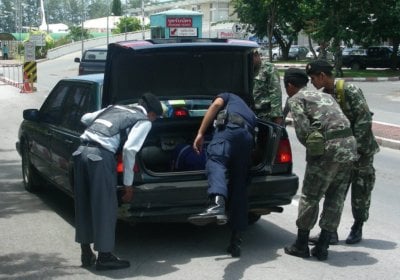 Meanwhile, Phuket Governor Udomsak Uswarangkura has announced that he will hold a press conference at Phuket Provincial Hall at 2 pm tomorrow to answer questions about the military takeover and its effect on the province.

Earlier today, Gov Udomsak reported to Army Region 4 Command in Krabi with a list of government officials who have maintained their posts despite military takeover.

Phuket International Airport Director Sq/Ldr Pornchai Eua-aree, told the Gazette this morning that the situation at the airport was normal, with no reports of canceled flights.

However, a group of about 100 military personnel stationed in Krabi arrived at the airport at around 2 am today to maintain security, he said.

Their presence there had not disrupted activity or created any unease among people using the airport, he reassured.

“They are are just there to provide security and will continue to conduct security checks, especially at the entrance to the departure lounge. I would like to inform the public that there are no problems whatsoever flying in or out of Phuket,” he said.

“I think the tourism situation in Phuket will quiet down for about a week, given that some tourists may be alarmed by the turn of events. But when travel agents explain to them that this type of thing is fairly common in Thailand and that the situation here remains peaceful, they will begin to return,” he said.

Speaking sarcastically the day after the coup, he said that it would not affect prospects for the upcoming high-season for tourism much – the terrorist bombings in Haad Yai had ruined the outlook already.

“If you were a tourist, would you still want to come to Thailand?” he asked.

Like most tourism industry experts the Gazette talked to, K. Panu declined to speculate further, saying that it was still too early.

“With the bombs in Haad Yai and now this coup, I am not really sure about the tourism situation in Phuket at the moment…There might be a short-term downturn in occupancy rates, but if the situation remains non-violent then we might start to see the outlook return to normal in a week of ten days.”

In his view, the coup amounted to little more than an administrative overhaul at the national level.

Phuket Provincial Police had already heightened security measures following the terrorist bombings in Haad Yai last weekend and were therefore prepared for any additional threat that might arise, he said.

His department was ready to deal with any mob action that might arise, whether they be celebrating the coup or protesting against it – but thus far there has been none.

Under the martial law imposed last night, police are authorized to break up assemblies of more than five people, he said.

The press would be subject to increased censorship, he warned.