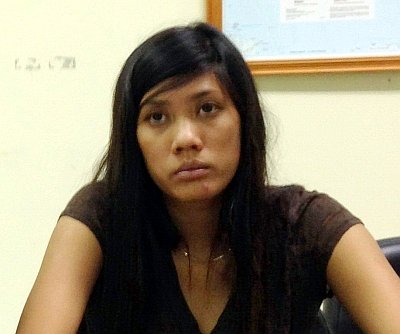 PHUKET: In a busy two days for drug law enforcement officers in Phuket, a woman was arrested in possession of cocaine at Phuket International Airport on Wednesday and five men with heroin were arrested at an address south of Phuket Town just 24 hours earlier.

Lt Col Suthirat Tojumpa, chief of the Phuket branch of the Narcotics Control Board, told the Phuket Gazette today that he and a team of officers had gone to the airport on Wednesday at the request of Customs officers after a suspicious female had been stopped at arrivals.

“Customs officials suspected that 26-year-old Thai national Kiriya Inmek, who arrived in Phuket on a flight from Brazil, was concealing drugs. However, an initial search failed to confirm those suspicions.

“We escorted Ms Kiriya to Vachira Phuket Hospital, where staff took an x-ray of her stomach. The x-ray image confirmed that she had swallowed 22.35 grams of cocaine,” said Col Suthirat.

The colonel went on to provide details of an unrelated drugs bust on Tuesday, when officers seized 878g of heroin and arrested five men at two residences south of Phuket Town.

The officers first raided a house in Wichit, where they arrested four men from Chiang Rai in possession of 819g of heroin.

“Our investigation then led us to the house of another gang member on Chao Fa West Road. There we arrested Jungong Sae-yin after discovering 59g of heroin hidden in a wardrobe,” Col Suthirat said.

The news follows airport Customs officers last month arresting Hortencia Ferreira Novela, 37, from Mozambique, who attempted to smuggle 6kg of crystal methamphetamine (ya ice) into the country in her suitcase.