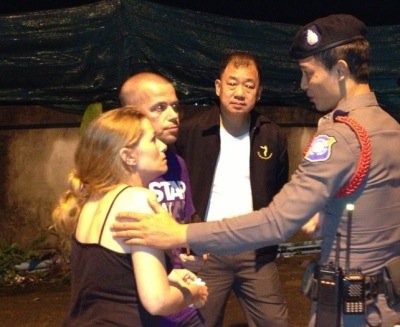 PHUKET: Phuket Police arrested on Wednesday a second suspect associated with the abduction and robbery of a Danish woman in the designated Patong Safety Zone on November 26.

Diana Muller, 37, reported that on November 26 at about 9:30pm she had been abducted, threatened at knife point and robbed by two men, Patong police said.

She told police that the pair had convinced her to get onto the motorbike by offering her a lift. However, once she was on the bike the men took her to the secluded, nearby Phra Baramee Soi 7 where they threatened her with a knife before taking her purse.

During police questioning Mr Thanuthong confessed to the crime and named his accomplice as Tak Panmuang.

Mr Thanuthong told police that they had picked up Ms Muller near a public restroom along the Patong Beach road.

Mr Tak drove the motorbike while Thanuthong sat at the rear with Ms Muller sandwiched in the middle, he told police.

After driving away from the robbery scene, the pair decided to separate as the motorbike had developed a flat tyre, he added.