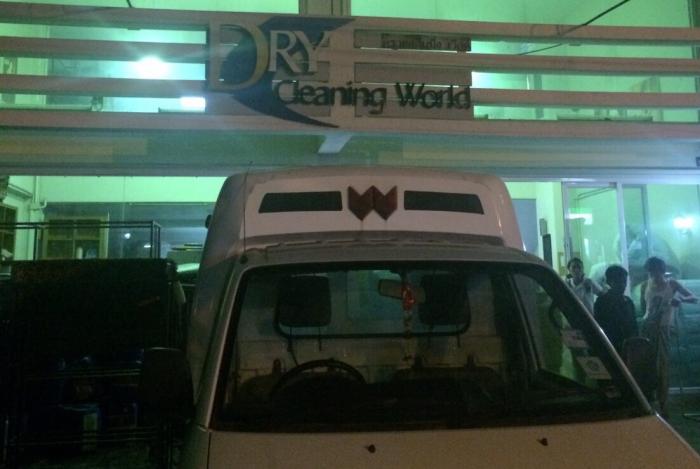 PHUKET: Police are on the lookout for five men allegedly involved in stabbing and killing a Myanmar man at a Patong laundromat yesterday morning. The incident is believed to have been prompted by a ‘love triangle’.

Lt Sirinat Cherdchutrakulthong of Patong Police received reports of the incident at about 3:45am.

“Blood was splattered on the floor of ‘Dry Cleaning World’, and a knife was also found nearby. Blood-stained sheets were also found at the scene. The body had already been taken to Patong Hospital by Kusoldharm Foundation rescue workers before we arrived,” said Lt Sirinat Cherdchutrakulthong of Patong Police.

The 22-year-old victim, named only as ‘Chit’ by police, had a knife wound in his back.

“We questioned Yee Nai, a friend of the victim, who was the only witness to the incident. She told us that five men, including one named Thin Niang Zo, arrived on motorbikes and parked in front of the store,” Lt Sirinat told Phuket Gazette reporters.

“They entered the shop and tried to stab Mr Chit, who attempted to escape but failed. He was stabbed once before the gang fled the scene,” he added.

Ms Yee told police that the men rode away toward Karon. She added that the motive of the stabbing could have been jealousy or revenge, as Mr Thin’s wife had reportedly left her husband and moved in with the victim.