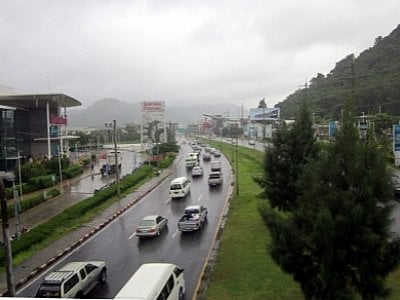 PHUKET: June has started out as a very rainy month in Phuket, with sustained rainfall and thunderstorms covering the island.

The Thai Meteorological Department (TMD) website reports rainfall reached a high of 100.2mm over the 24-hour period of June 1 with winds topping 64 kilometers per hour (kmh) at Phuket International Airport.

Phuket’s Department of Disaster Prevention and Mitigation this morning told the Phuket Gazette that so far no serious flooding had been reported during the recent heavy rains.

The TMD forecasts indicate continuing thunderstorms with a gradual reduction into the middle of next week.

The TMD’s Southern Meteorological Center (West Coast) at Phuket Airport this morning described the situation as “Moderate southwest monsoon prevailing over the Andaman Sea and the Southern Thailand West Coast. All ships should proceed with caution.”

The forecast for the 24-hour period starting at noon today calls for fairly widespread showers covering 80% of the area, with isolated heavy rain.

Winds will be southwesterly from 15kmh to 35kmh.