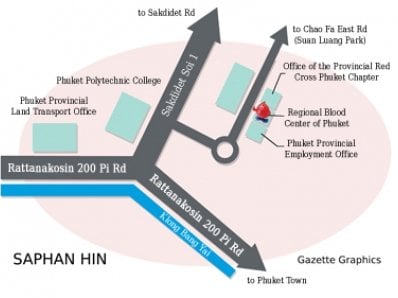 PHUKET: The Phuket Regional Blood Center run by the Thai Red Cross has announced the dates and locations of its mobile blood donation clinics in Phuket and the Andaman Coast region this month.

There are currently no shortages, but the center wants to build up stocks of all blood types in the run-up to the Songkran Festival holiday period, when demand for blood peaks due to an increase in accidents, Mrs Pornthip said.

The dates and times of the clinics in Phuket are as follows:

Other March clinics in nearby provinces include:

Donations can also be made at the Phuket Regional Blood Center on the following days and times.

– Saturdays, Sundays and Public Holidays: from 9am to 3pm (no break for lunch)