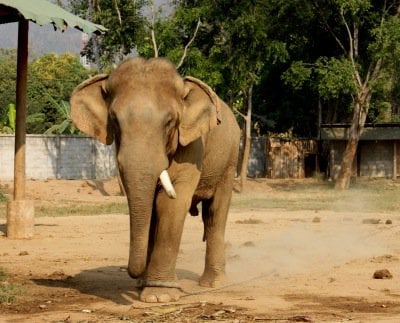 PHUKET: The male elephant that went berserk and killed a Phuket tourist at Khao Sok National Park on February 22 has been released into a wildlife sanctuary and will no longer be used in the tourism industry, the Phuket Gazette has learned.

One of the survivors, Helen Gothe of Australia, said she was told by the general manager of Siam Safari that the animal had been sent to a sanctuary after it attacked the elephant she was riding.

The pachyderm later stomped to death a Swiss woman in her 60s who had the misfortune of being put on its back.

The most badly injured among the survivors was 45-year-old Christine Colomb, who described the deceased woman as “her closest friend”.

Mrs Gothe and her husband Sean, who sustained only minor injuries, returned to their native Australia on March 1.

Mrs Gothe suffered a broken rib and other injuries. She told the Gazette that she visited Mrs Colomb at the hospital last Sunday.

The Swiss woman was moved to a regular room on February 27 from the ICU at Bangkok Phuket Hospital, where she was treated for injuries including 12 broken ribs and a punctured lung.

The injuries were sustained when branches struck her torso as the elephant was running at full speed through the jungle.

Mrs Colomb was due to be released from the hospital on February 28 or March 1, but is expected to spend a few weeks at her resort before she will be able to fly home, she said.

“We’d like to thank Siam Safari for all their help in smoothing things out,” Mrs Gothe said.

“The general manager in particular was really great. All of the staff at the hospital were fantastic and all the people at our resort, the Baan Lamai in Patong, were great as well,” she said.

“The people at Siam Safari told us that the elephant has been moved to a sanctuary, and all the other elephants got were checked by a vet and are all healthy, apart from our elephant that sustained some cuts but she was doing really well. She’s eating normally and functioning normally, so that was fantastic to hear,” she said.

She ended by saying she and her husband were planning a return trip to Thailand later this year.

Phuket Promise: The beach guards ‘will be back’