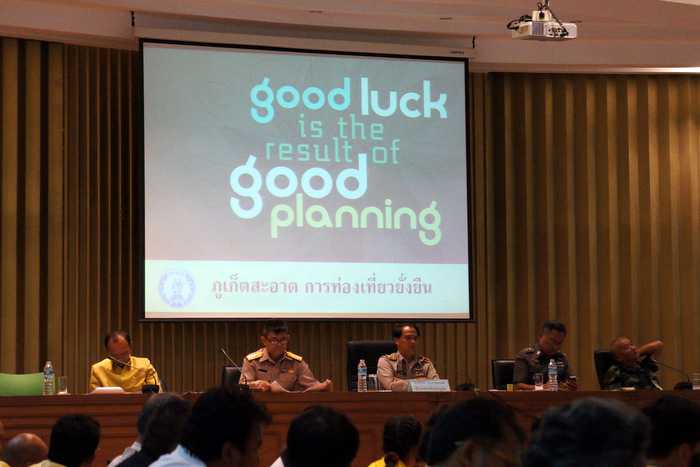 PHUKET: Vendors renting out umbrellas, offering massages or selling food and drinks are allowed to return to Phuket’s beaches – but not vendors who rent out sun-loungers or beach chairs.

Governor Nisit Jansomwong delivered the news at a meeting at Provincial Hall yesterday, when he laid down a stringent list of conditions under which beach vendors will be permitted to return to work.

Special zones covering only 10 per cent of the sand at each beach will be allocated to vendors.

“This ensures that the vendors do not detract from the natural beauty of the beaches,” Governor Nisit explained.

The vendors must wear uniforms. All fees charged by vendors must be displayed and be the same at all beaches – they cannot be increased to accommodate “extra services”.

No cooking or smoking is permitted on the beach, and the vendors are allowed to operate from 9:30am to 4:30pm.

“Everything must be cleaned up by the vendors at the end of each day,” Gov Nisit said.

Vendors must have been previously registered with the local authority as a beach vendor in order to gain the right to return to work on the beach. The right to work at the beach is not transferable to a third party, he added.

“Officers from relevant departments will regularly check on the vendors to make sure they are following the rules. These officers may be from the local government in the area, the Royal Thai Navy or the Tourism Authority of Thailand,” Gov Nisit warned.

Permission for beach vendors to return to work is on a three-month trial period, he stressed.

“If any vendors break any of these new rules, I will reconsider whether we should allow any services on the beaches at all,” Gov Nisit said.

Governor Nisit called on officials to help restore Phuket’s pride as one of the most popular tourist destinations in the world.

“Problems with the management of our beaches have plagued us for too long. We all want to move Phuket forward and make it great,” he said.

“But it must be done lawfully, and we must make sure that the beach ‘ownership’ problems do not return.”

Governor Nisit pointed out that beaches at Phi Phi Island and Maya Bay were among the “World’s 100 best beaches” in a CNN Facebook poll earlier this year.

“But not Phuket,” he said. “Let’s do this together, and, above all, I want to see Phuket people united in welcoming tourists.”

“We need to rent out beach chairs for elderly tourists. They can’t just sit on the beach without a chair,” he said.

“The governor needs to consider this, as we could return to work to make going to the beach more convenient for many tourists.”