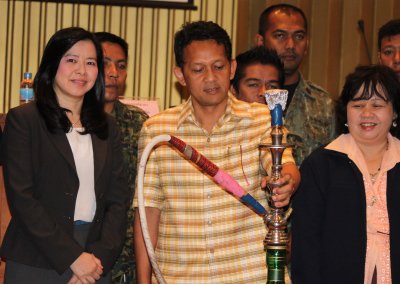 During the meeting, V/Gov Chamroen stressed that all baraku bars – “baraku” being the Malay-derived word for hookah water pipes – could be adequately controlled using existing laws and regulations.

Early in March this year, provincial officials led by the Vice Governor inspected 26 baraku bars in all three districts of Phuket. As a result of that operation, 11 bars and 10 people are now under investigation.

Other charges arising from the raids have been brought against six foreigners who were caught working illegally, and two individuals who tested positive for drugs.

Some of the bars under investigation in Phuket Town have since been closed by the owners.

In line with Vice Governor Chamroen’s comments about using existing regulations to control baraku venues, the owners of the 11 bars are being investigated for selling illegally imported tobacco, a practice that contravenes Section 27 of the Customs Act BE 2509 (1966).

V/Gov Chamroen said that most customers in Phuket Town’s baraku bars were between 14 and 18 years old. He also noted that officers had found traces of ya ice (crystal methamphetamine) at a few of the bars.

“Previous to the official crackdown, baraku establishments operated openly. Since coming under scrutiny from the authorities, they have moved their operations behind closed doors. More often than not, it was a large number of motorbikes parked outside these venues that sparked officers’ interest in the premises,” he said.

According to official reports, most baraku bars in Kata, and an even higher number in Patong, are owned by foreigners.

The same report goes on to state that customers frequenting those baraku bars in tourist areas are mainly from the Middle East, and that illegal alien workers are employed by the bars.