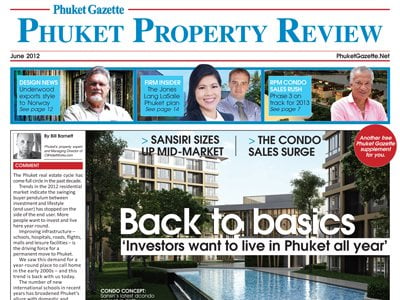 PHUKET: The launch of a series of new supplements and expansion of the Phuket Gazette‘s Andaman, Nationwide and Airline editions has driven the newspaper’s circulation to close to 50,000 readers a week.

The Nationwide and Airline editions, both printed and distributed by Gazette partner newspaper The Nation, have kept pace with the rapid growth of the local Andaman edition here in Phuket.

“Airline distribution, earlier focused on the weekend international flights of The Nation’s 11 partner airlines, has now been expanded to include even the domestic flights – Saturday only – of THAI Airways,” the Gazette has announced.

Readers of this week’s issue of the Gazette, which hit the streets at noon today, will be quick to note a striking new look. But now in our 20th year of publication, this change in design style does not foretell any change in editorial policy. Though we remain tabloid in physical format to ensure ease of handling for our readers, we continue to ‘say no’ to flamboyance and sensationalism in news reports.

Readers will also find something extra tucked inside the Gazette today – a free 16-page property supplement.

The Phuket Property Review is packed full of the latest island property news, views, features and announcements of new products coming to market.

“With a print run of 63,000 copies, our latest supplement sets a record for circulation of a publication devoted exclusively to Phuket real estate,” says Fraser Morton, the Review’s managing editor.

Feedback from readers and advertisers nationwide prompted the Gazette to launch a string of new supplements over the past year: Phuket Life & Style magazine, Christmas and Valentine’s specials, the yachting magazine All At Sea, the Best of Phuket, and of course the Phuket Property Review itself.

With its array of new products, new editions and current status as a truly mass circulation publication, the Phuket Gazette continues as the island’s leading journal – not only in print, but also in electronic output where the Gazette Online remains, as its slogan says, ‘Always at the Top of Google’.

Phuket sea gypsies get ID cards and water, but no new fishing rights