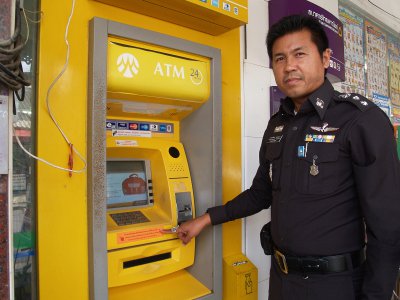 PHUKET: Phuket police are warning of fraudulent phone calls informing members of the public they are “lucky winners” and promising them large cash prizes.

The criminals ask victims to transfer a small sum of money in order to claim the reward, which is never seen.

In some cases, the hapless victims are instructed to make the transaction at a specific ATM which has been rigged with a skimming device or camera, giving thieves access to the victims’ card information and PIN number.

Phuket Provincial Police Commander Pekad Tantipong said, “If you follow orders from such callers and complete the transactions they have requested, your card information may be copied. After that, money in your account may be withdrawn without notice, 3,000 to 4,000 baht each time.”

Kathu Police Superintendent Arayapan Pukbuakao said there are two or three reports of the scam every month. Thefts range from a few thousand to over 100,000 baht.

He has ordered his men to attach bright orange stickers to Patong ATMs warning the public to report incidents to the police and banks immediately.

Recently 120 Phuket police officers were trained in the prevention and suppression of card fraud as well as the trade in illegal fuel.

Commander Pekad said, “Even though Phuket is a tourist destination with a lot of credit cards being used, there are fewer cases of credit card fraud and illegal fuel trading taking place compared to other provinces.”