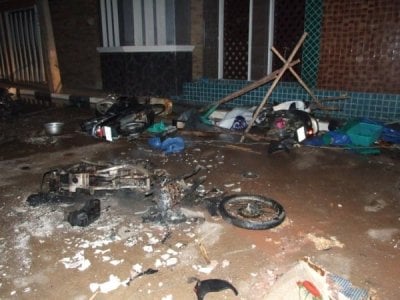 The latest skirmish in the months-old battle started at about 9pm. Around 200 men alleged to be project workers tried to destroy and burn some 40 motorbikes and a truck parked at the entrance to restrict worker access.

The dispute began in mid-2009, when residents set up a roadblock and petitioned the governor to halt work at the project, located on 78 rai next to Soi Thep Anusorn, off Chao Fa East Road.

The protesters claim some of them were tricked into giving up their homes and that others are being pressured to leave the village so their homes can be demolished to make way for the project.

According to local residents, a mob of workers armed with guns, knives and clubs stood by while a backhoe moved in to destroy the vehicles, which were then set alight.

Outnumbered, about 100 protesters fled and notified Phuket City Police, who rushed to the scene.

Phuket City Police Superintendent Wanchai Ekpornpit, who led the team, said the workmen ignored orders to stop the destruction and only dispersed after warning shots were fired.

Col Wanchai said the brazen defiance of the law indicated that an influential figure must be involved.

Police would work seriously on the case, questioning suspects to determine who had ordered the workmen’s action, he said.

Villager Kitima Suwan, who called the police, said “I heard many gunshots and the sound of fighting outside. When I went out to check I saw those villagers running away from the workmen, who were using lengths of wood and iron to destroy the vehicles. That is why I called the police.”