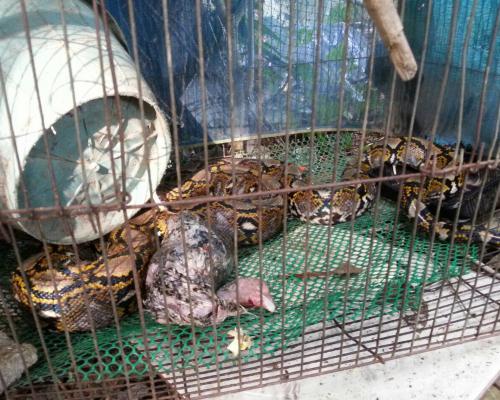 PHUKET: A chicken-owner tried to save his fowl from a python yesterday morning, but his efforts came too late; the chicken had already expired.

An official of Radio Thailand Phuket called Kusoldharm Foundation rescue workers for help catching the snake at 7:30am.

The official, who asked not to be named, told rescue workers that he was alerted to the snake’s presence when he heard his chicken making strange noises.

“I came out to take a look and saw the snake swallowing it. I didn’t know what to do so I hit the coop once with a stick. It let go of the chicken,” he explained.

Rescue workers retrieved the three-meter-long python from the chicken’s pen and took it to a jungle location to release it.

It was not the first time a python had visited the Radio Thailand officer’s residence.

“About two weeks ago, a python tried to eat my chicken. But that time a friend helped me catch the snake, and we let it go,” he said.