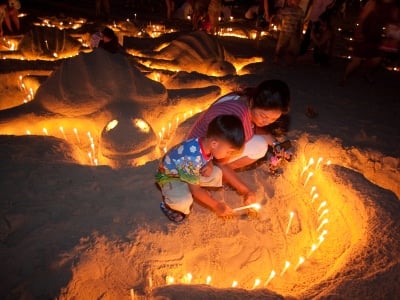 The day began with wreaths being laid at the Tsunami Wall of Remembrance in Mai Khao following a speech by Sarawut Srisakukarm, President of the Mai Khao Tambon Administration, at 8:30am.

At the Tsunami Monument in Kamala, services began just after 11 am with a speech by Kazushi Miyashita, President of the Phuket Japanese Association, followed by a speech by Governor Tri Augkaradacha.

Among the dignitaries at the service was Japanese Ambassador to Thailand Seiji Kojima.

After midday, a mass prayer by Buddhist priests from Japan was held, followed by the laying of wreaths at the monument.

In his speech to the crowd gathered on the beach, Ministry of Tourism and Sports Permanent Secretary Sombat Kuruphan said, “The Light Up Phuket memorial service is held not only to remember those who passed away in the tsunami, but also acts as a reminder to the public and the relevant authorities to be continually aware of the threat of natural disasters.”

Such services helped protect against the loss of life and property from any impending catastrophes, said Mr Sombat.

“They invoke a cautionary mode of thinking that helps to minimize the impact of any potential natural threats,” he added.

The permanent secretary also called on the public not to fear any predictions that a tsunami was to strike the region before December 30.

“If an earthquake or tsunami occurs, we have the warning system as well as the evacuation procedures to move local residents and tourists to safe areas,” Mr Sombat said.

“Tourists and local residents can rest assured that if a tsunami does occur, the government and relevant authorities will warn them and move them to safety,” he added.

The permanent secretary then called on the crowd to light their candles and place them in the sand.

As if on cue, once the beach was illuminated by hundreds of candles, the heavens parted and heavy rain fell from the skies.