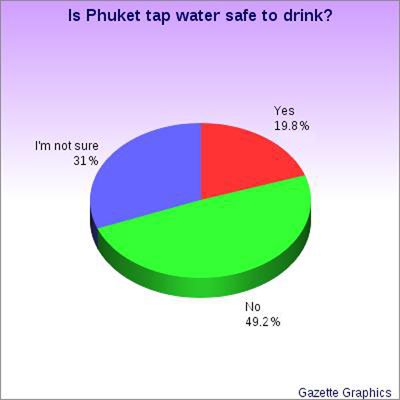 PHUKET: Less than 20 per cent of Phuket Gazette readers think tap water on the island is safe to drink, results of the latest online readers’ poll reveals.

The poll, launched on December 18, asked readers: Do you think tap water in Phuket is safe to drink?

Reflecting a great deal of uncertainty about the quality of mains water on the island, almost a third of all of those who took part (31%) answered: “I’m not sure”.

In a breakdown by demographics, Thais were more likely to think the local water supply was safe to drink than their foreign counterparts.

However, more than half (52%) of respondents who identified themselves as tourists said they weren’t sure, a far greater percentage than the number of expats (17%) who were uncertain.

Overall 632 people voted in the 10-day poll. For the complete results click here.

For an in-depth report on the potability of water provided by the island’s two largest water providers, pick up a copy of the latest Phuket Gazette available on newsstands around the island.