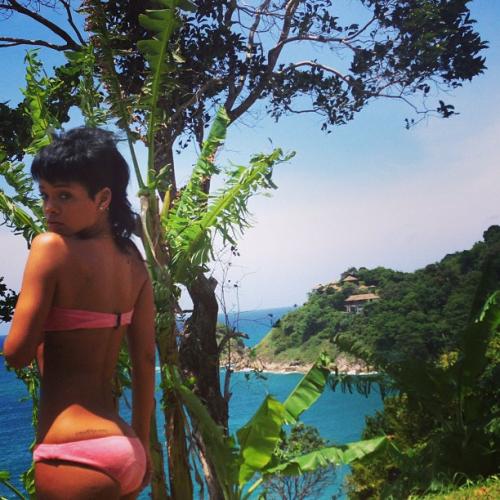 From Twitter account @rihanna, Rihanna expressed her surprise over a Patong showgirl’s abilities. The tweets have been re-tweeted more than 1,000 times, reported The Nation.

The Rihanna tweets stated: “Either I was phuck wasted lastnight, or I saw a Thai woman pull a live bird,2 turtles,razors,shoot darts and ping pong, all out of her pu$$y” and “And THEN she tried to turn water into coke in her $!! Uhh yea, all I’m saying is water went in and soda came out! I’m traumatized!!!”.

Rihanna fans and Thai people across the nation rallied behind Rihanna after the tweets went viral, many placing the blame of the potential bad image created of Phuket and Thailand in the hands of officials.

The support of Rihanna stands at opposite ends with the Thailand’s reaction to a Lady Gaga tweet about wanting to buy a fake Rolex in Bangkok in May, which led to the Commerce Ministry’s Intellectual Property Department filing a complaint with the US Embassy (story here).

“We cannot blame her [Rihanna]. What she said is true. You can easily find it [sex shows] as you just walk around Silom or Khaosan Road. So now when someone brings the issue up, some people start to get upset. It is not because I do not love my country, but it is because I look at it [sex shows] as the reality. This problem should be fixed at the root,” commented ThE-bOy on popular Thai forum Pantip.

Weerawit Kurasombat, president of the Patong Entertainment Business Association (PEBA), concurred with many online comments that the underlying issue was corrupt officials.

“Our members are against sex shows. However, it is possible for these ping-pong bar shows to continue because police are paid under the table to allow it to happen,” Mr Weerawit said. “Officers refuse to take action against them because of the money they are paid.”

Rihanna’s stay in Phuket after her performance in Manila on Thursday had already led to a media firestorm focusing on photos of her with a slow loris, a protected species, on Soi Bangla (story here).

Additionally, Rihanna’s Instagram account showed a photo of a piece of fan material to be autographed, which she said was handed to her at immigration.

“Gave the immigration guy my passport and he handed me this in return without a word! Lol #thailand,” Rihanna wrote.