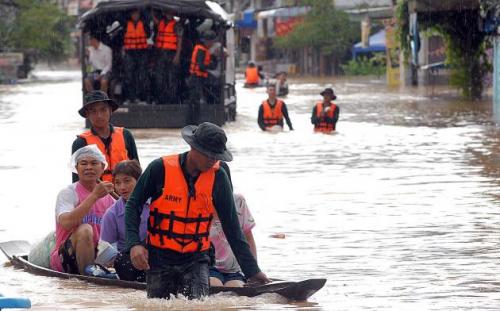 PHUKET: While industrial estates and households along waterways are bracing for heavy water runoff, the authorities have soothed public fears, saying the situation will not be as bad as in 2011.

“The situation, so far, is not as worrying as in 2011. It’s only that the media is reporting about it so intensely that the public has started panicking,” Deputy PM Plodprasop Suraswadi said yesterday, adding that this year, the level of floodwater was only half of that in 2011.

Major dams are still well below their capacity, Plodprasop said, adding that rain was mostly falling in areas to the south of the dams. He added that Prime Minister Yingluck Shinawatra, in her capacity as defence minister, had instructed military units across the country to help flood-affected residents in their vicinity.

Plodprasop, who oversees flood and water-management operations, said that though the flooding has not resulted in any casualties, it has brought the situation to a “semi-crisis” level. All relevant agencies have been instructed to set up coordination centers in order to implement measures and handle emergencies – which will be overseen by a center set up at Government House.

Districts in about 20 provinces have been inundated, with several roads left impassable and train services suspended.

In 2011, with more than 10 industrial estates inundated and millions of households affected, insurance companies estimated losses at a catastrophic US$12 billion (Bt375.5 billion).

In order to prevent another catastrophe, industrial estates in Ayutthaya and Saraburi have stepped up prevention measures, though this time the operators are not too worried.

Amara Charoengitwatta-nagun, a director of Rojana Industrial Park, said she was confident the industrial park would be safe this year, thanks to its 77-kilometer-long, 5-meter-tall floodwall.

“It is normal that heavy rain will cause flooding, as Ayutthaya is surrounded by three rivers. But the situation is not like 2011, when the dams broke and we were not prepared for the runoff,” she said.

However, Industry Minister Prasert Boonchaisuk said Ayutthaya’s Saha Rattana Nakorn Industrial Estate was possibly most at risk of inundation as it had only just completed 30-per-cent of a temporary dam. Veerapong Chaiperm, governor of the Industrial Estate Authority of Thailand, said he had already assigned a deputy governor to closely monitor the situation.

Meanwhile, the ready-for-assembly flood-prevention tools and barricades put up at several industrial estates, namely the ones in Bang Phli, Lat Krabang and Samut Sakhon – which have not suffered any flooding so far – will be moved to Saha Rattana Nakorn Industrial Estate to deal with the immediate threat. The Kabin Buri industrial estate has not been flooded because it is located in an elevated area, though other areas nearby have been submerged.

According to Payungsak Chartsutipol, chairman of the state-owned insurance fund for natural-disaster coverage, the situation could not yet be classified as a catastrophe as it was in 2011. He said the Cabinet would only declare it as a catastrophe when flood damages exceed Bt5 billion and if more than 2 million people are affected.

Payungsak said the fund’s directive was to approve cash transfers when an earthquake was more than 7 on the Richter scale and in storms, if the speed of wind was more than 120 kilometers per hour.

“Since the flooding situation cannot be classified as a disaster, the fund cannot approve any cash transfers yet,” he said.

The National Catastrophe Insurance Fund was set up after the 2011 flood crisis. Foreign insurance companies raised their insurance premiums after that, though businesses and households can seek coverage from the state-owned fund, which collects only 0.5 per cent of insured value from households, 1 per cent from small and medium-sized enterprises and 1.25 per cent from large firms for catastrophe-protection coverage.

Meanwhile, floods have been spreading in several provinces.

The free Ubon Ratchathani-Bangkok Route 145 train service has been suspended indefinitely due to rail tracks being flooded, while trains 139 and 67 on the same route will be travelling to Sri Khoraphum Station in Surin, though no free vans will be provided to deliver passengers to their destination.

A fuel cargo train derailed yesterday morning in Nakhon Ratchasima’s Sikhiu district, though no further damage or casualties were reported. The State Railway of Thailand said this accident had not been caused by flooding and that the train could be salvaged by yesterday evening.

Motorists have been advised to exercise caution when travelling on Route 201 in Nakhon Ratchasima, Route 3627 in Prachin Buri’s Kabin Buri district and Route 226 in Surin, as they are all under 45 to 80 centimeters of water. People are being urged to use shortcuts or alternative roads. Those requiring help can call the Department of Highways’ 1586 hotline at all times.

Separately, a prison in Prachin Buri has transferred several of its women inmates to the provincial prison in neighboring Sa Kaew, the Corrections Department said, adding that this facility in Kabin Buri district was the only one prone to flooding.

Prachin Buri province and the Korat area in neighboring Nakhon Ratchasima are most affected by heavy flooding as they are close to Khao Yai National Park, where heavy rain has continued for the past few days.

Around 200 households in Phitsanulok’s Bang Krathum district were submerged due to overnight flash floods. There are four other districts that have been declared as disaster zones.