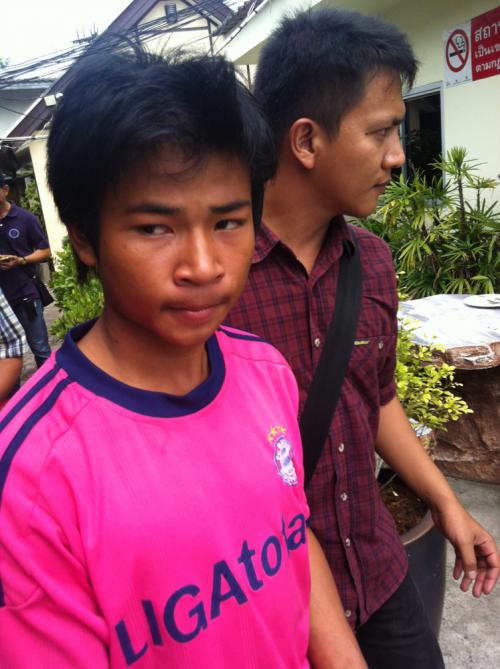 PHUKET: Two teenagers charged yesterday with shooting dead an 18-year-old man outside of a 7-Eleven in Rawai claimed that the gun was fired out of self-defense.

Korrawit Sriboonma, a waiter at the popular Sala Loi seafood restaurant on the Rawai beachfront, was gunned down with a homemade gun on the corner of Soi Laem Ka Yai at about 4am on Sunday (story here).

Charged with the killing and presented to the press at Chalong Police Station yesterday morning were Panuwitch “Nice” A-sana, 19, and Jakkapong “Mew” Srisawang, 18.

Both are residents of Rawai.

A third suspect, a 15-year-old male, was released after Mr Panuwitch and Mr Jakkapong concurred in their statements that the juvenile played no part in the death of Mr Korrawit.

“Mr Panuwitch confessed that he was the one who shot Mr Korrawit with the handmade gun, but he said he did it only to protect Mr Jakkapong,” Chalong Superintendent Kritapas Daztharasorn told the press.

The suspects claimed that Mr Korrawit had threatened them with a “Sparta blade”, a long knife named for its resemblance to the weapon used by ancient Greeks.

Mr Panuwitch and Mr Jakkapong have been charged with gang attack with intent to kill and with the possession of, and carrying of, an illegal firearm in public.

“They both accepted the charges,” Col Krittapas said.