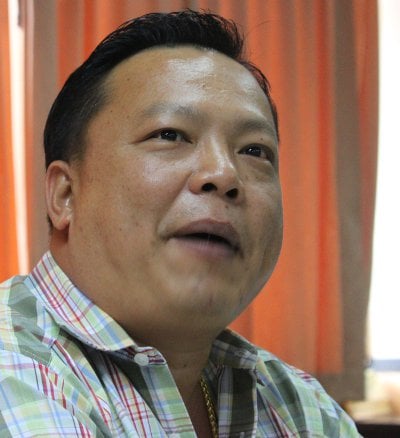 PHUKET: Phuket businessman Atsadakorn “Pod” Seedokbuab, wanted by police for being the mastermind behind the assassination of Phuket newsman Wisut “Ae Inside” Tangwitthayaporn early last month, surrendered to police this morning.

“I had nothing to do with it. I knew Ae very well. Even when he joined the red shirt protests in Bangkok, he called and asked me for money – and I gave it to him. I supported him,” Mr Atsadakorn told the press at Phuket City Police Station today.

“We had a good, close relationship. Why would I kill him?” he said.

Mr Noppadol was arrested by police as the alleged getaway driver in carrying out the killing. He was flown to Phuket from Cha-am, where he was arrested, and told the press on January 16 that he had no involvement in the killing.

However, Mr Atsadakorn today confirmed he did know fellow suspect Somkuan “Boy” Deepan, 48, before the killing.

Mr Somkuan is wanted as the man who paid the alleged assassin, since named by police as Tossaporn Ketkaew. He also remains at large.

“I know Khun Boy [Mr Somkuan]. He is a friend and even I hired him to operate a digger at a construction site at one of my developments,” Mr Atsadakorn said.

Mr Atsadakorn told the press that he took so long to present himself to police because he returned from Burma last month and discovered he was wanted by police for hiring the killers.

“I have a business there [in Burma]. I returned to Bangkok last month to find out that I was wanted by police [in Phuket],” Mr Atsadakorn said this morning.

“I have surrendered to police so I can clear my name. I’m worried that Phuket people will think that I’m a very cruel person.

“I assure you that I had nothing to do with the murder. I don’t know why I was dragged into this,” he added.

Mr Atsadakorn confirmed that he did take umbrage with Mr Wisut over comments published by Mr Wisut in his magazine Inside Phuket.

“I used to do some bad things, but I have cleaned myself up. I will never do those things again,” he said.

Mr Atsadakorn added that his surrender did not depend on him being granted immediate bail.

His comments follows Region 8 Police Deputy Commissioner Pisan Chuldilok announcing on February 10 that the police were in negotiations with Mr Atsadakorn about the terms of his surrender.

During those negotiations, Mr Atsadakorn demanded that he be granted immediate police bail as a condition of his surrender, Maj Gen Pisan said.

However, police wanted to present him to the court and allow the court to decide whether or not to allow him to post bail.

“Today I surrender to the police, I am willing to accept whatever actions the police want to take from here,” Mr Atsadakorn said today.

The one police officer present at the press conference made no comments to the press.

The Phuket Gazette has yet to learn whether or not Mr Atsadakorn has been granted bail and remains free to conduct his business dealings.

Mr Atsadakorn is the owner of KPP Cable TV and a vice president of the Phuket Chamber of Commerce.

Phuket on high alert in wake of Bangkok terror bombs