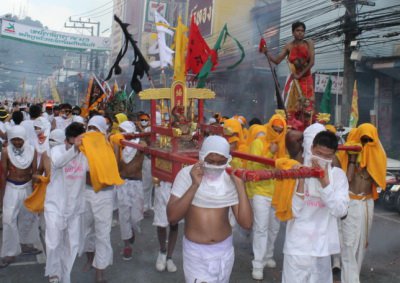 PHUKET: Sapam Shrine held their street procession today with some 2,000 spectators lining the route to watch ma song (spirit mediums) and to pay their respects to highly revered Chinese gods.

The street procession departed Sapam Shrine at 7am and marched through Phuket Town, ending up at Saphan Hin.

Before the procession got underway, Phuket City Municipality had issued a request that people use firecrackers responsibly and avoid using any of the more dangerous types of fireworks altogether.

The request even advised owners of vehicles that use natural gas (NG), as opposed to regular fuel or liquid propane gas (LPG), to park their vehicles away from the procession route.

Phuket local residents, students and employees from both government and private organizations joined in the street procession as it moved through Phuket Town to Saphan Hin.