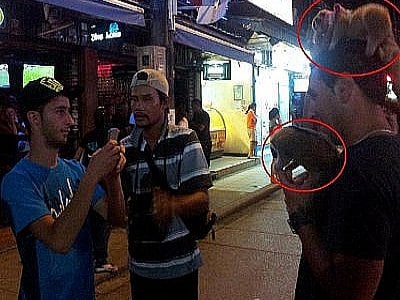 The raids to come follow a similar nighttime raid on October 4 that netted five touts who were charging tourists to have their photos taken with a slow loris, a protected species.

“I will lead our officers in a raid, arresting those who are using slow lorises as part of their trade, as soon as I hear back from the Provincial Office,” Awat Nitikul, chief of the Environmental Conservation Unit based at Phuket’s Khao Phra Thaew wildlife sanctuary, confirmed to the Phuket Gazette today.

Already, 10 rescued slow lorises have been relocated to the Phang Nga Wildlife Nursery Station, he said.

“The officers at the nursery will take care of the older ones for the rest of their [the slow lorises’] lives, while the little ones will be released into the wild when they are big enough to survive,” he added.

Patong Police have been told to take legal action against anyone on Soi Bangla who is in illegal possession of a slow loris, Patong Police Superintendent Chiraphat Pochanaphan told the Gazette.

Gambling “spectators’ to appeal to Phuket governor for clemency