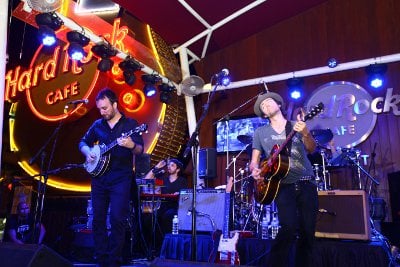 PHUKET: Fire broke out at Phuket’s Hard Rock Cafe on Rat-U-Thit 200 Pi Road in Patong at about 9am today after a spark reportedly jumped from the iconic electric guitar neon sign and started the blaze.

The fire was discovered by a security guard, who said he saw a spark leap from the big guitar neon sign that is known worldwide as the Hard Rock Cafe icon.

Twenty firefighters from the Patong Department Disaster Prevention and Mitigation (DDPM-Patong) branch arrived on seven fire trucks. It took the team about 20 minutes to put out the blaze.

The marquee sails and stage area in front of the building suffered extensive damage.

“Repairs may take up to two weeks. We have asked for permission from the police to continue trading inside the main building as it was entirely unaffected by the fire. We cannot afford to lose the 500,000 baht a night we make in trade,” said Mr Saenee, of Destination Properties Thailand, which operates the hotel attached to the Hard Rock Cafe.