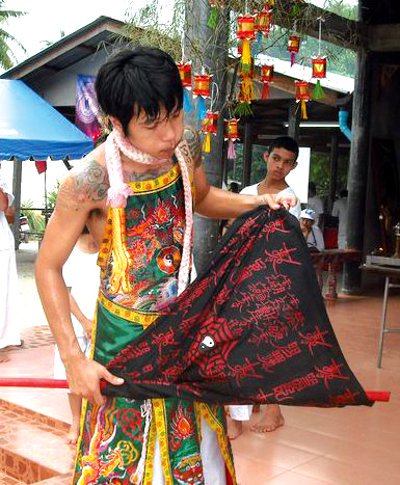 PHUKET: Phuket native Peerapong Buapetch, 27, spends the majority of his year as a handyman for a local hotel. However, once a year he is called on to take part in one of the most important cultural events in Phuket – the Vegetarian Festival, which this year draws to a close on Tuesday.

Chosen by the Chinese god Guan Yu to be a ma song (spirit medium), Mr Peerapong attends the festivities conducted at Muang Mai Shrine during the festival, where he and his fellow ma song become focal points of local and international attention.

Here, he shares his opinion on the way that the often gruesome ma song images are used in the media:

Though the images of ma song bleeding are not pleasant, I don’t mind having my face published this way in the media. I have also talked to my friends who are ma song and they all agree that they are more than happy to be pictured in this way.

When I look at the pictures, I see a Chinese god – I don’t see myself. I am not ashamed of the way I look or what I am doing. Everyone around me, my family and employer, fully support me.

I have no control over my body or what is going on around me during the street procession. It feels as if I am in another world. I have no idea what I look like during the procession until someone shows me a photograph or a video clip. Sometimes images of me turn up in the media.

I don’t care if some people think that what we are doing is barbaric, as long as we are able to achieve our objective (removing pain and fear from others). I am very proud to play such an important role in the Phuket Vegetarian Festival and I will continue playing my part, as it is a great honor.

Our history says that ma song torture themselves in order to draw out the pain and fear of others. I believe that this is true. So no matter how the media portrays us, we will continue to perform our duty to the community.

However, ma song is not a position you can apply for. All ma song are chosen by Chinese gods. After a cultural trip to Chinese shrines in Panang, Malaysia, when I was 23, strange things started to happen to me.

I would have severe headaches that doctors couldn’t explain. My neck and shoulders felt heavy, and both of my legs would shake – it felt like someone was riding on my shoulders all the time.

My family suggested I consult a Chinese monk, which is how I discovered that I am the ma song for Tee Kun, also known as Guan Yu.

People from around the world come to the Phuket Vegetarian Festival specifically for the ma song processions. They want to see the ma song torturing themselves by piercing their faces with strange objects like umbrellas, swords, bicycles and other such things.

When I have my own children, I will encourage them to take part in the festival by eating a vegan diet. As for being ma song, I can’t guide them. They will either be chosen by a Chinese god for that role or they will not.

This story was originally published in the October 20 issue of the Phuket Gazette as part of the First Person series of articles.

World Sports: Pietersen to come back with a bang: Flintoff