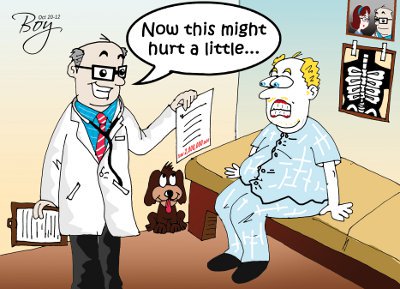 PHUKET: The in-depth report of local hospitals charging foreigners more than Thais for all forms of healthcare (click here) should not come as a surprise to any long-term expats living in Phuket. The practice of two-tier pricing is so deeply entrenched into the local social fabric that the national parks have established it as a formal policy.

Even the Phuket Zoo, the subject of many such complaints received by the Phuket Gazette over the years, could point the finger and blame the government for setting the trend.

Westerners who think they are being routinely gouged more than any other foreign nationality on the island should think again. A story on the same topic published in the Gazette years ago revealed that one tourist attraction on the island had westerners paying 50% more than locals – achieved by putting the inflated price in Arabic numerals on their products – but had Japanese tourists paying up to 200% more than the local price.

When it comes to healthcare, however, it is far more difficult to write off the differences in prices as affecting tourists only, especially in Phuket, where the most recent census two years ago calculated that 115,881 foreigners were living on the island. Deducting the 100,000 or so Burmese legally working on the island leaves about 15,000 foreigners who call Phuket home.

With that number in mind, and given the staggering number of foreigners involved in motorbike accidents on the island, it is easy to see why former British Ambassador to Thailand Asif Ahmad during his term in the Land of Smiles repeatedly urged all foreigners to make sure they had adequate travel insurance. That plea easily extended to urging foreigners to have adequate medical insurance.

But as our report highlights, the question remains: If hospitals in Phuket are charging foreigners excessive rates for treatment, how much insurance is enough? Considering how much foreigners are being charged for minor treatments, one can easily understand why the Gazette is so often reporting on foreigners having to beg for donations in order to pay for major surgeries here.

While we do not expect any foreigner, tourist or resident to be relieved of the responsibility for taking out extended medical coverage for unforeseen circumstances, a more even “playing field” is certainly within reach.

One of the groups hardest hit by inflated medical fees are surely the very people the Thai government claims to be trying to attract: the so-called “wealthy” foreigners, usually retired and likely to spend millions of baht on a home here, be it a luxury villa, a modest bungalow or a condo built to “western standards”.

Perhaps retired foreigners on the island could be allowed to opt in to payment of the same modest social welfare fees that foreigners working here pay – and then be treated the same when it comes to paying for local healthcare. That would automatically put them on par with Thais for hospital care. Who could find fault with that, and on what basis?

Phuket Opinion: Of MICE and mangroves