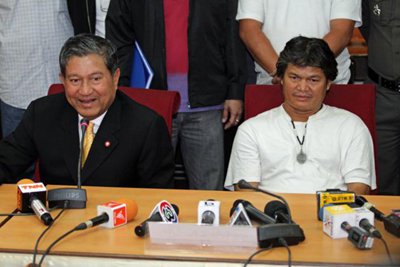 One explosive device was placed in front of a Bangkok Bank branch; two were found at a road intersection; and three more were found under a bridge near a market.

Police said the bombs were found after officers arrested a man on suspicion of planting a bomb at a traffic island in front of the Government Lottery Office (GLO) on December 6. The suspect then told police he had set bombs in three different locations.

According to the MCOT news agency, the suspect is a resident from Rayong province, some 620 kilometers north of Phuket. He was working with several others. He reportedly told police that the group had planned to place explosive devices in eight locations in Bangkok but only managed to do so at three of them.

Bomb disposal experts disabled the devices which were found on Friday. The device found on December 6 was said to be incomplete and would not have been able to explode. Police said it had been placed to cause panic.

The Thai government recently called for heightened vigilance amid the upcoming New Year’s celebrations. On New Year’s Eve in 2006, a series of explosions hit nine locations in Bangkok, killing three people and injuring nearly 40 others.

Chalerm said the suspect came from Sakon Nakhon and has been staying in Bangkok’s Laksi district, and had been hired to raise goats for the people in the area.

Chalerm alleged that Jirawat placed six homemade bombs at three spots. The deputy prime minister did not say how the man had obtained the homemade bombs.

Chalerm said Jirawat placed a bomb beside the building of Bangkok Bank’s on Sukhumvit Soi 77. The bomb was supposed to be detonated with a remote control.

Two bombs were stuffed in a PVC pipe and left at the Wat Kingkaew Intersection and they were set to be detonated with a timing device.

Chalerm said the three other bombs were put inside PVC pipes and placed under a bridge on On Nuj Road in Lat Krabang district. They were also timed to explode.

Chalerm said the bomb squads of the Metropolitan Police had safely disposed of all the bombs.

The deputy prime minister said the bombs appeared similarly made to those found on Rajdamnone Road.

Jirawat was charged with possessing explosives without a license. Chalerm said the suspect was arrested at 3am at the Wat Kingkaew Intersection on a frontage road of the Bangkok-Chon Buri Montorway.

The suspect sat smiling with his face down during the press conference. He said he would testify only in court.

After reporters raised many questions for the suspect to answer, Chalerm, who was sitting beside him, cut short the conference. Chalerm said he ended the press conference because Priewphan was very sleepy.

Chalerm concluded the conference by asking Bangkokians to celebrate New Year holidays without having to worry about bomb attacks.