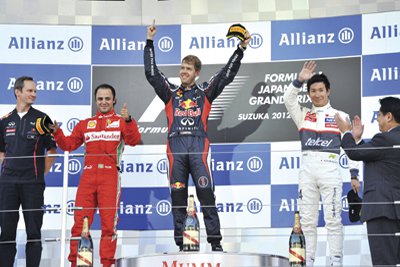 PHUKET: It was over some suitably austerity-friendly pink fizz that I heard the bizarre news that Greece has proposed to subsidize a Patras F1 GP by US$37 million.

Against a backdrop of 17 Eurozone ministers reviewing budget proposals for a nation facing meltdown, this looks somewhat frivolous. One wonders how it will play in Berlin, in the wake of Schumacher’s retirement announcement.

Anyway, we then opened the Ridgeview Bloomsbury, an English sparkler that recalls the champagne method’s invention in London, 30 years before being used in France.

And we watched Suzuka’s momentous first lap. Alonso collected a puncture from a gentle shunt with Räikkönen, which sent him waltzing out of the race and opened up the season’s championship to the field. Grosjean was dubbed “the first lap nutcase” by Webber, whom he tipped off the track.

It was all so exciting that we opened the Veuve Clicquot Cuvee Saint-Petersburg. It was elegant and ripe.

We watched Vettel be majestic, Massa rise to the challenge, Kobayashi drive the race of his career, and the McLaren drivers manage disaster brilliantly. The Widow was working.
Alonso is now only 4 points ahead of Vettel in the Drivers’ Championship. Räikkönen is 37 points behind Alonso and Hamilton is 5 points behind him.

With five races to go, it suddenly looks hard for Alonso to win. Vettel now only has to finish his races ahead of Alonso, and with the Ferrari’s poor form, that looks probable. Räikkönen and Hamilton must win races to be in with a chance. Webber and Button need to win, and hope for Alonso and Vettel to have another DNF or two.

This weekend it’s the Korean GP. Yeongam is 400 kilometers from an airport and has few facilities. All the drivers have to stay at the only five-star hotel in the area and other team members and journalists are reduced to love motels.

It is not a popular venue, but the circuit is interesting. The 5.6km track has a 3km permanent track and temporary street circuit section, and features a 1.2km straight. It is one of F1’s five anti-clockwise circuits, which tests drivers’ fitness. It has a mixture of fast and slow turns that interferes with rhythm, and two obvious spots for overtaking.

Alsonso won here in 2010. In 2011, the result was Vettel from Button, Alonso, Webber and Hamilton. It could be similar this year.

This year, the Pirelli F1 soft tyres are softer than last season. But expect another two-stop race.

Maldonado had a late spot of good news, his financial supporter Hugo Chavez has been re-elected President of Venezuela. That should ensure Maldonado a seat next
season. I suspect he might be opening a bottle of bubbly himself.

The race will be shown on the Big Screen at The Green Man. Qualifying 12pm today, race 1pm Sunday. Click here for more information.