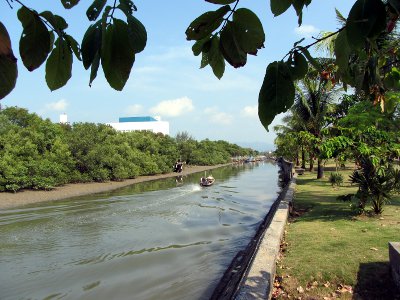 PHUKET: More than 100 Phuket Town families whose homes or businesses were damaged by flooding last week have registered for assistance through Phuket City Municipality.

Peerapong Matra from the Social Welfare Department told the Gazette that Phuket City Municipality opened a flood-relief center on August 23, the day after Phuket Town flooded.

“We initially wanted to close the center on Tuesday, but people were still coming in so we will continue to accept assistance applications until Friday,” Mr Peerapong explained.

The applications will be forwarded to the Phuket office of the Department of Disaster Prevention and Mitigation (DDPM-Phuket), which will investigate claims and provide compensation according to the damage suffered, he added.

Meanwhile, the the DDPM office in Rassada closed its center for flood-damage claims on Wednesday.

DDPM-Rassada officer Siriporn Sasu said that about 60 people had filed claims before the deadline.

During the floods, Rassada Mayor Phudit Raksarat expressed fear that “as much as 40 per cent of Rassada municipal area” had been affected by the floods.

The hardest-hit area was probably the low-lying Soi Kingkaew Uthit, which decades ago housed a vast mangrove forest but is now home to some 2,000 families of squatters.

Meanwhile, the Social Welfare Department at Patong Municipality confirmed that only nine people had applied to their office for assistance.

“We will continue to receive applications for claims until September 5, then we will provide assistance ourselves. Patong Municipality will not send the report to the DDPM; we are willing to handle the compensation directly,” he said.

“These five projects are already underway as funding was provided under the budget for the fiscal year 2012,” Gov Tri said.

“However, we need a further 760mn baht to prevent flooding in Phuket City, Wichit and Rassada. We presented this request to the Cabinet meeting in Phuket [in March], when it was approved in principle.

“If this 760mn baht is approved, flooding in Phuket City will no longer be a problem,” he added.

Andrew Strauss: “It just hasn’t been a consideration”