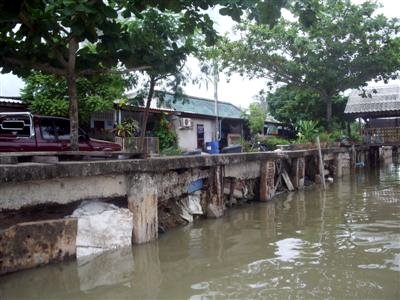 PHUKET: About 50 households in the Haad Saen Suk community in Phuket Town are calling for help from local authorities after their neighborhood flooded with seawater during the recent monthly high tide on Tuesday.

Some 200 people live in the affected area, which is built on a 200-meter-long dirt road along a canal leading to the nearby coast.

The recent flooding appears to be due to the partial collapse of an old retaining wall built there to keep the seawater out.

The monthly high tide has long posed a problem for the community, but never before so severe.

A Haad Saen Suk resident told Gazette this morning that in the past the seawater only covered about five inches above road level during the monthly high tide, but the flooding was closer to one foot above road level at about 11am on Tuesday.

“Water can pass through the wall, which has been broken for quite a long time. The road was already here when I moved to the area almost 20 years ago. It is old and badly in need of repair,” the resident said.

Mr Somsak said the inundation affected many people, as the entire Haad Saen Suk community has 400 households and some 4,000 people.

“We have contacted all of the concerned organizations, but none have taken action to fix the problem,” he said.

The Saen Suk area was once the site of extensive tin mining operations that radically transformed the natural landscape of the area.

Much of the community is built on “reclaimed land” that is actually tin-mining tailings.

These sediments cover the once-sandy bottom of Patong Bay up to two meters thick in some places.

They are also responsible for the existence of Saphan Hin, Phuket Town’s largest park that is located nearby.