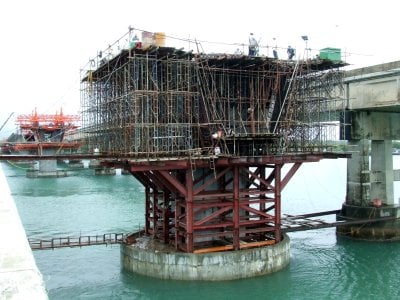 PHUKET: Residents living in Tah Chat Chai, at the northernmost tip of Phuket, have been hard hit by the roadworks and the construction of the new bridge off the island.

Storm drains have been filled in by earthworks, causing their village to flood every time another rainy season deluge comes. The recent redirection of northbound traffic over Thepkrasattri Bridge has left their businesses floundering.

Engineers and construction crews have been going gangbusters on the project, nicknamed by workers as “Sarasin Bridge 2”. The project is now over 44% complete, more than 10% ahead of schedule.

The bridge will span 655 meters, while 1.73 kilometers of a new two-lane road will stretch 560m on the Phuket side and a further 510m on the Phang Nga side.

Construction started July 1 last year and is scheduled to be complete by June 20, 2011, at a cost of just under 378 million baht.

Explaining in part the construction crew’s enthusiasm for completing the project is a rider in the contract imposing a late fine of 113,400 baht for each day construction continues past June 20.

Of all the communities in Tah Chat Chai, Village 5 is suffering most.

Located south of the old Sarasin Bridge, business has dried at up at the many restaurants along the Haad Sai Khao beachfront.

Somporn Thansakul, the elected community leader for Moo 5, told the Gazette, “The construction has created two main problems: First, as the one-way [southbound] road from Thepkrasattri Bridge onto the island to Tah Chat Chai checkpoint is now two ways, it’s quite dangerous for local villagers when they go out to the main road.

“The point where the cars join the Thepkrasattri Bridge road is narrow, which is dangerous. Why don’t they let cars to continue on the old roads, like they used to, and widen the road where it joins the bridge to make it safer,” he asked.

Mr Somporn also expressed concern about the impact the traffic diversion has had on local businesses.

Another major problem was that the open-ditch drains on the main road have been blocked by mounds of dirt and other debris moved there during construction.

“This means that the water in the ditches on the main street of our village has nowhere to flow, so the road in our village floods all the time,” he said.

“This problem still has not been solved. It seems they only care about doing the construction work and don’t care about us villagers. They don’t notice how their work has left the community here living in chaos. I told them about the problem before at a meeting, but nothing has changed,” Mr Somporn told the Gazette last week.

The meeting has amounted to nothing, Mr Somporn said. “About 400 families – almost 3,000 people – are affected by these problems, but they are trying not to make a big issue of it, especially the Moken sea gypsies. But, I am the community leader and I have to do something for them. The problems are still not being resolved,” he said, adding that he hoped to get Phuket Governor Wichai Phriasa-ngop involved.

Patthanapong Thongsuk, an engineer with the construction contractor Italian-Thai Development Co, strongly disagrees with the suggestion of having traffic continue through Moo 5.

“Having the normal volume of traffic continue through the village as it used to, then joining the Thepkrasattri Bridge road and heading north would be too dangerous,” he told the Gazette.

As for the dirt-filled drainage ditches, Mr Patthanapong said he initially thought that the water in the ditches along the main street in the village flowed directly toward, and finally into, the sea – not back along the main road.

To this he added, “We will dredge them [the ditches] soon so the water flows through very well.”

As an example, Mr Patthanapong pointed out that for the safety and convenience of local villagers his company was regrading the potholed dirt road running from the beachfront, past the local temple and joining the main road further north.

This work was not part of the construction contract and was carried out at no cost to the villagers, he added.