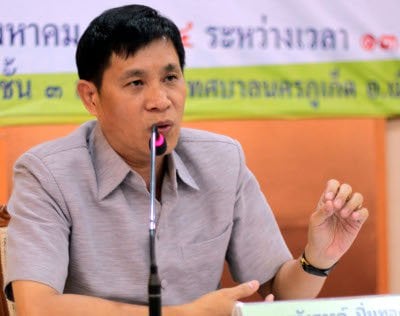 PHUKET: Phuket City Municipality in conjunction with the Pollution Control Department, under the Ministry of Natural Resources and Environment, is calling for people to donate all old items containing heavy metals.

“Many items containing heavy metals are disposed of improperly, Often, people just throw them away with the household trash,” Mr Rangson said.

“As we know, many modern devices are made of components that contain heavy metals, which must be disposed of as hazardous materials. They must be managed correctly,” he said.

The target of the collection project in Phuket is to collect 84,000 items, he added.

“The heavy metals will be sent to a recycling plant in Chon Buri, in central Thailand,” Mr Rangson said.

Twelve collections points for items containing hazardous substances have been set up across the island, including at:

At each collection point are two boxes.

The small boxes are for small devices, such as mobile phones, batteries, MP3 players and digital cameras.

The large red big boxes are for larger items such as DVD players, fax machines and printers.

Items will be accepted until HM King Bhumibol Adulyadej’s 84th birthday on December 5, also honored in Thailand as Father’s Day.

Every person who donates an item for recycling will have the chance to win prizes including a notebook computer, digital SLR camera, printer, sewing machine, luggage, wall clocks, diaries and polo shirts.

For each item donated the person is given a sticker to place on the donated item with the person’s name and contact information.

The winners’ names will be drawn on December 15.

The names of the winners will be announced on December 21.

German victim of Phuket mob bashing out of coma