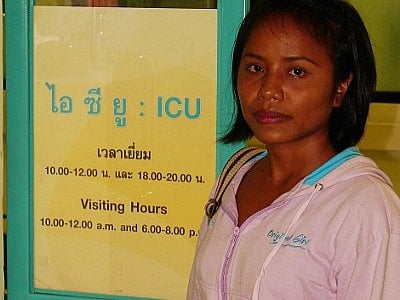 PHUKET: German national Kurt Trotnow, who is in intensive care after being beaten by a mob in Patong, is conscious but still on a respirator.

“Kurt is conscious now but still cannot talk because he is on a respirator. When he wakes up, I talk with him and he looks at me. He understands my words,” said his wife, Jiraporn “Joy” Chucheep.

Mr Trotnow, 53, is recovering at Phuket International Hospital after being set upon by a group of men not long after he refused to pay a 200-baht tuk-tuk fare for an 800-meter ride.

He underwent a second operation to stem bleeding in the brain at 9pm Tuesday night.

After arguing with the tuk-tuk driver, Mr Trotnow shoved him to the pavement and walked away. As Mr Trotnow and Mrs Jiraporn headed toward the nearby Aroonsom Plaza, the men attacked. (Click here to read original report.)

He lapsed into a coma but has since regained consciousness.

Mrs Jiraporn explained that she had known Mr Trotnow for a long time and that they were married one month ago.

“We planned to go back to Germany on September 7 so he could have an operation for a medical condition on the 15th ,” said Mrs Jiraporn.

She had given up hope of finding the men who attacked them, but still hopes for Mr Trotnow’s full recovery, she said.

“I cannot remember the number of people who beat him or even the [tuk-tuk] driver’s face.

I think no one dares to tell the truth because they all know each other and they continue to earn a living there,” Mrs Chucheep said.

“I don’t expect to find the offenders, my only wish now is that Kurt gets better,” she added.

A friend had informed Mr Trotnow’s family, but she was not sure when they would come to Phuket, she added.

The incident sparked fury throughout the international community, with German honorary consul in Phuket Dirk Naumann on Wednsday highlighting the incident at the quarterly meeting of Phuket honorary consuls with local officials.