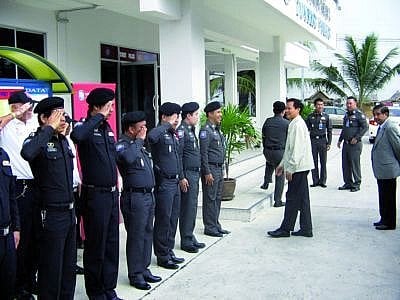 PHUKET: Members of a special government working committee were in Phuket earlier this month to gather information for a study on whether Tourist Police nationwide should be transferred out of the Royal Thai Police for administration by a different government agency or agencies.

While in Phuket, they were greeted by local police officers and members of the local Volunteer Tourist Police led by Patong-based entrepreneur Claude de Crissey.

Capt Torpan Pusuntiae of the Tourist Police station in Phuket Town explained that the committee was on a fact-finding mission in the region, collecting data and listening to the opinions of local officers.

Among the data gathered were how many tourists visited each region annually and how many used the Tourist Police 1155 “Your First Friend” hotline since it was established two years ago.

When the committee finishes its work, it will present its recommendations to Cabinet, which will have the final say as to whether or not a re-organization will occur, he added.

Capt Torpan said he was unaware of any specific deadline for the committee to make its recommendations, however.

The Tourist Police headquarters in Phuket Town is responsible for tourist safety in Phang Nga as well as Phuket, Capt Torpan explained.

The station’s 25 officers represent just one tourist police officer per 281,751 foreign tourists who visit one or both of the two provinces annually, he said.

However, they do enjoy the help of a large number of Volunteer Tourist Police. Thus far, 200 volunteers have passed the mandatory training, which includes first aid. Of these 112 are on active duty in Phuket and Phang Nga: 76 Thais and 36 foreigners.

Thanks to their language abilities and familiarity with Thailand, the foreign volunteers provide invaluable assistance in dealing with compatriots who face problems during their stays here, Capt Torpan said.

They want to recruit more Russian-speaking volunteers to help tourists from that country, he said.

Phuket’s new hospital to open in May

Murder suspect arrested in Phuket after 17 years in hiding