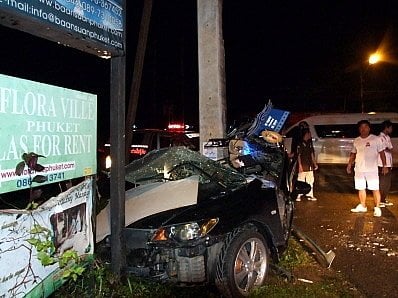 PHUKET: Last year we pointed out the irony of the central government’s nine-million-baht investment in the Patong City welcome sign on the Patong Hill road, at a time when local authorities were telling us it was impossible to come up with the meager funds needed to simply paint lines on that notorious road.

Now, five months later, the bizarre sign – actually, more of a monument – is a fait accompli but the road that runs past it remains without any of the markings necessary to prevent head-on collisions or vehicles running off the road because they can’t see where it’s going.

The problem is hardly restricted to Patong Hill. As anyone familiar with roads across the island will attest, the absence of clear lane markers is an island-wide problem that needs to be addressed urgently.

For two weeks every year, during the New Year and Songkran Festival holiday periods, police set up checkpoints around the island to try to limit the number of accidents.

Daily reports are issued along with grim tallies of the dead and injured. Along with these figures, officials are asked to mark down the cause of each accident from a list of several options that include such expected causes as “drunk driving” and “speeding”.

In Phuket the most common option is neither of these, however, but the final one that reads “other”.

The Phuket Gazette feels, and many officials agree, that this in large part reflects the deplorable state of the roads here. A culture of carelessness, potholes, poorly-designed speed bumps and numerous other factors all contribute to Phuket’s road safety notoriety.

But of all the possible solutions, the easiest and cheapest way by far to keep tour buses from falling off cliffs and cars from driving into roadside homes is simply to mark the roads to something that at least approaches international standards – including the use of long-lasting, reflective paint.

Keeping our roadways well-marked and well-lit should be among the most important duties of every local administration, as well as other government agencies with responsibility for road safety. But these same organizations tend to sit on their hands and simply look the other way – while death stares them in the face.

It’s time to give a rest to the chalk used to outline the dead and maimed in the road, and to bring out the paint. To fail in this evokes notions of manslaughter.

Phuket Island View: Sidecars extremely dangerous, but not to worry

Phuket Opinion: Keeping the cops out of the drug business