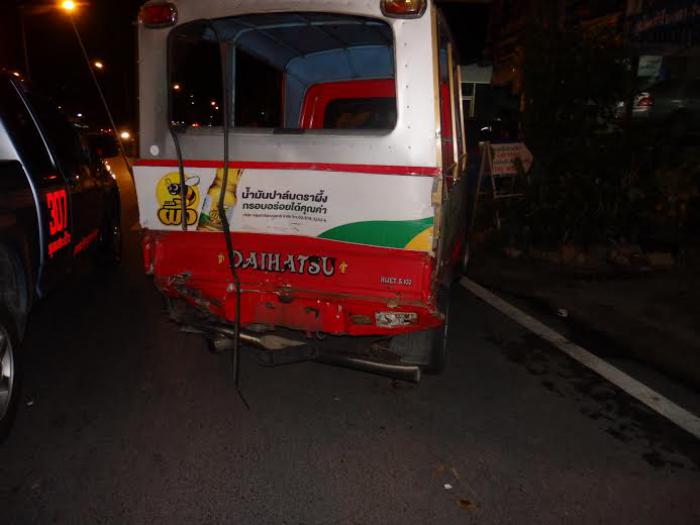 PHUKET: A Tourist Police officer injured his back and damaged a tuk-tuk and two other cars when he lost control of his patrol car on a wet Thepkrasattri Road on Tuesday night.

Local residents notified authorities of the accident near Baan Sapam Mongol Wittaya School at about 9pm.

“When we arrived at the scene we saw a damaged white Toyota with a Tourist Police logo on the side,” said Lt Phittaya Kathawut of the Phuket City Police.

Sen Sgt Maj Thornpirom Kaitilarb of the Phuket Tourist Police was driving north on the road on his way to Phuket International Airport for work when the accident occurred.

“It was raining and the road was slippery so Sen Sgt Maj Thornipirom lost control of his car, which slid sideways and slammed into the back of a parked tuk-tuk,” Phuket Tourist Police chief Urumporn Koondejsumrit told the Phuket Gazette.

“The tuk-tuk lurched forward and damaged the car parked in front of it, which then hit a third parked car.”

Sgt Maj Thornipirom injured his back in the impact and was taken to Vachira Phuket Hospital for treatment.

The police vehicle was taken to the police maintenance pool for repairs, and the owners of the tuk-tuk and two other cars will be compensated for the damages, said Maj Urumporn.