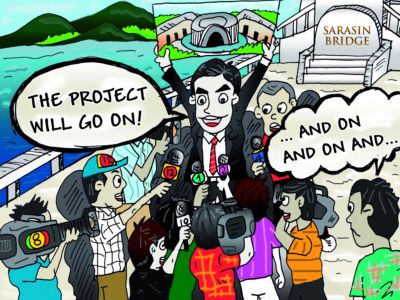 PHUKET: The latest obstacle in Phuket’s never-ending effort to build a world-class International Conference and Exhibition Center came with the rejection of the project’s Initial Environmental Examination (IEE) by the Office of Natural Resources and Environmental Policy and Planning (ONR).

Given all the work and money spent on planning and drawing up the design for the Center, to be built in Mai Khao, the rejection came as a huge blow to the many people in Phuket who support the project.

Perhaps the project’s most ardent supporter, Phuket MP Anchalee Thepabutr, slammed the decision, insisting that the ONR panel was “using the wrong information” when it determined that the project was not financially viable. She reportedly even threatened to file a suit with the Administrative Court if the IEE findings were not reviewed.

That the project enjoys strong support locally and regionally is apparent, and we at the Phuket Gazette are not aware of a single environmental group applauding the rejection, a decision which many presume to have been purely political.

The popular belief is that Phuket needs such a facility not only to cement its status as a world-class tourist destination, but also to fill the more than 43,000 registered hotel rooms on the island. Although the actual number of rooms for rent here is no more possible to ascertain than the number of Burmese workers, some official estimates put it at roughly double this figure if all of the unregistered accommodation units were accounted for.

See front page story in the current issue of the Gazette. (Digital subscribers click here to download the full newspaper.)

As if 70-80,000 rooms weren’t enough, thousands more are scheduled to open in the “Greater Phuket” provinces of Phuket, Krabi and Phang Nga by 2014, the same year Phuket Inteternational Airport is scheduled to double its annual throughput capacity to 12.5 million passengers.

Adding gravity to what appears to be a rapidly forming black hole to suck in as many tourists as possible, is the recent unveiling by the Tourism Authority of Thailand of its latest marketing marvel: “The Miracle Years of Amazing Thailand”. Yes, it’s a two-year, half-billion-baht campaign tasked with doubling both tourist arrivals and income by 2014.

Bringing great relief to anyone who feared the island’s northern tip would not eventually be covered in concrete was Pheu Thai Party spokesman Prompong Nopparit, who arrived in Mai Khao last weekend to assure local residents that the problematic report was not politically influenced, and that the Pheu Thai Party had no intention of axing the 2.6-billion-baht budget approved for the Center by the previous government.

With support like that, perhaps we can all rest assured that the IEE in its current form will be about as long-lived as the project site’s former neighbors, the sea turtle population of Mai Khao.