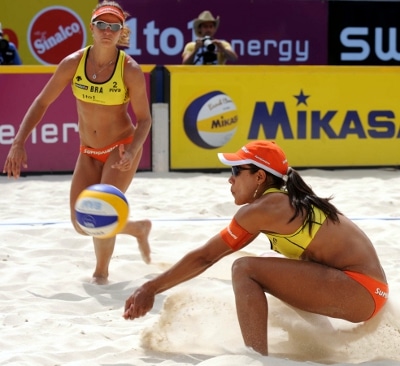 PHUKET: Seventeen of the world’s top 20-ranked teams have confirmed their participation in the PTT Phuket Thailand Open, the final round of the FIVB Beach Volleyball Swatch World Tour, which will take place on Phuket’s Karon Beach from November 1 to 6.

The Phuket tournament is the world’s largest women’s beach volleyball event and will see the teams competing this year for US$190,000 in cash prizes.

Among the elite pairings are the current world champions and world number one team of Franca Larissa and Felisberta Da Silva Juliana of Brazil. Winning the 2011 World Championship in Rome, the formidable duo have also captured gold medals in five other tournaments this year.

Their closest rivals are likely to be the reigning and two-time Olympic champions Misty May-Treanor and Kerri Walsh of the US, who are occupying the number two spot in the world rankings.

Asia’s leading team, the Guangzhou Asian Games gold medallists Chinese Chen Xue and Zhang Xi, who hold third place in the rankings, will also be here for the games.

The total number of teams entering the Phuket tournament is likely to exceed last year’s record of 70.

There will be live TV broadcasts nationally and internationally to over 700 million households worldwide of the two semi-final matches on November 5 and the third-place play-off and the final showdown on November 6. PGTV, the television arm of the Phuket Gazette, will also be broadcasting the November 6 games.

“According to our data, around 20,000 spectators watched the matches in the six-day tournament last year. Among them were about 5,000 Thais. During the competition, an approximate 350 million baht was spent in Phuket, which helped to promote tourism in Phuket and Thailand alike,” said Wiwatchai Boonyapak, executive director of the events department of the Tourism Authority of Thailand.

“Only China and Thailand have been chosen as the two host countries in Asia. I hope this tournament will run smoothly and be a memorable success as in the past five years,” said Geoffrey Rowe, managing director of Pentangle Promotions, and Tournament Director.

The Nation, the Phuket Gazette and PGTV are charter sponsors of this world-class annual event in Phuket.