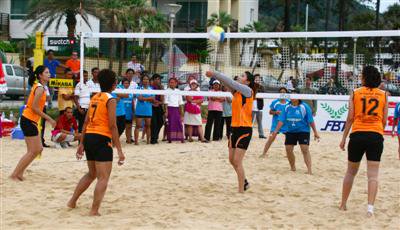 KARON, PHUKET: Top seeds powered their way into the semi-finals of the US$190,000 Phuket Thailand Open on Karon Beach yesterday, with April Ross and Jen Kessy-Boss of the US surviving a sturdy challenge from the Netherlands.

The FIVB announced yesterday that the Phuket Thailand Open was officially the largest event in women’s beach volleyball, having attracted a record-breaking 66 teams from 28 countries.

Running concurrently for the first time this year is a hotly-contested competition among teams of staff from island hotels.

In early morning play today, the US pair of Fendrick/Ivy USA took down rivals Ji/Xue of China in straight sets (21-19, 21-16) in 41 minutes, while the Greek pair of Arvaniti-Tsiartsiani were playing the deciding third set against Russians Bratkova-Ukolova as this goes to press.

In yesterday’s exciting play, reigning champions Ross and Kessy were joined in the semis by American compatriots and second-seeds Angela Akers and Tyra Turner. Ms Turner is back after partnering Nicole Branagh to win silver last year.

Ross and Kessy struggled to overcome Marleen Van Iersel and Sanne Keizer (24-22 21-18) in 46 minutes, giving the fourth-seeded Dutch pairing its first taste of defeat in the final event of the 2009 Swatch FIVB World Tour.

In a similar script, Akers and Turner found 30-seeded qualifiers Elisa Baquerizol and Liliana Fernandez Steiner of Spain a tough nut to crack. After the US pairing took the first set with ease 21-9, Baquerizol and Steiner dug in to win a hard-fought second set 21-19 before going down in the decider.

Kessy and Ross’s first win of the day came earlier in the third round, where they brushed off 17-year-old Ying Huang and Xi Zhang of China for the third time in a row on the World Tour.

The competition continues through tomorrow, with the semi-finals being played this afternoon followed by the medal matches tomorrow to decide which team will take home the US$30,000 first-place prize plus 600 FIVB world ranking points.

The Gazette is once again proud to sponsor this world-class event.

For the most up-to-date results and live scoring click here and here.

Better yet, get out there and cheer on the team from your homeland. Admission is free.