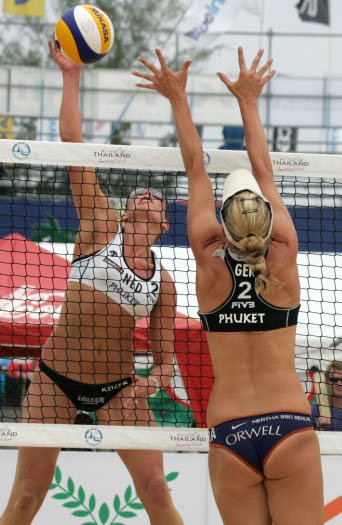 PHUKET: A team from the Netherlands and another from Brazil are through to the semi-finals of the US$190,000 Phuket Thailand Open after another day of world-class volleyball at Karon Beach today.

Later in the day, the Brazilians made easier work of dispatching Liliana Fernández Steiner and Elsa Baquerizo Macmillan from Spain in straight sets (21-16, 21-17) in 44 minutes.

Dutch duo Sanne Keizer and MarleenVan Iersel, seeded 8th in the tourney, defeated number two favorites Sara Goller and Laura Ludwig from Germany 2-1 (21-19, 19-21, 15-8) in 55 minutes to earn their place in the semis.

“We knew we had to give everything in this game, and we did,” said Van Iersel.

“We took more risks than usual. If you don’t take risks, this team is too good to beat. We got rewarded for taking those risks,” she added.

Six other teams remain in the hunt for the last two semi-final berths, to be decided by matches tomorrow.

Doris and Stefanie Schwaiger of Austria will play against fourth-seeded Americans Nicole Branagh and Kerri Walsh.

The loser will place seventh while the winner will play for a semi-final spot against Baquerizo and Fernandez Steiner, who had their best career finish last year in Phuket.

The Schwaigers today rebounded from a loss to Keizer and Van Iersel to beat Daniela Gioria and Giulia Momoli from Italy.

The win was no mean feat as Gioria and Momoli had earlier eliminated two-time defending Phuket Thailand Open champs Jen Kessy and April Ross of the United States.

Roos Van der Hoeven and Jantine van der Vlist from the Netherlands will play against Marta Menegatti and Valeria Rosso of Italy tomorrow.

They were scheduled to play Xue and Zhang today, but the Chinese forfeited the match due to medical reasons.

The winner between the Dutch and Italians will face Goller and Ludwig for the last semi-final spot.

The Phuket Thailand Open is the last event on the 2010 Swatch FIVB World Tour calendar, concluding with the finals on Karon Beach on Sunday.