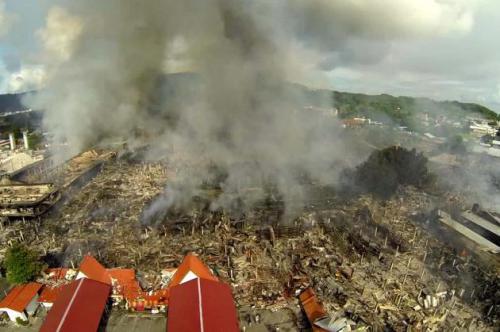 PHUKET: After 18 years in Phuket, the main SuperCheap store and warehouse were gutted on Wednesday in the island’s largest-ever fire.

Located on a 30-rai (4.8-hectare) plot once occupied by a factory, the main SuperCheap store – a legacy of the Anantajaroonwong family – had grown from being a rickety warehouse supported by wooden pillars and a corrugated-iron roof into a buzzing economic centre for local wholesalers and retailers, with a daily sales volume worth more than 10 million baht a day.

Under the helm of Boonsom Anantajaroonwong, the store sought no limelight, but managed to expand steadily – making it a competitor to be reckoned with across the region. There were 25 branches in Phuket alone.

The store, which offered no luxury goods, placed an emphasis on essential household commodities, thus enabling it to keep costs low. Only the cashier’s area at the main store was air conditioned, for example.

SuperCheap’s other strong points included its smart choice to shift from being a trader to a goods producer – including investment in a rice-noodle plant and its takeover of a Phuket furniture factory.

Its decision to employ some 700 workers from neighbouring countries, particularly Myanmar, also served as a customer magnet, since foreign employees also encouraged Phuket’s huge workforce of immigrant workers to buy the store’s goods.

It came as no surprise that Burmese was widely spoken in the store. Damages from the fire are estimated to be at least 500mn baht, a major blow for the convenience chain’s local operators.

The next challenge for SuperCheap, which has grown particularly popular in the past five years, will be the logistical supply of its local branches, now that its main store is no more.