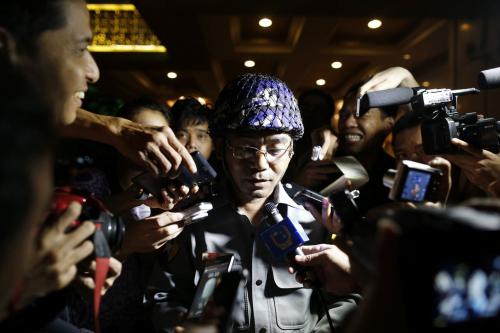 
More bomb blasts in Myanmar as police arrest four suspects
Reuters / Phuket Gazette
PHUKET: Several bombs exploded in northeastern Myanmar on Thursday, police said, the latest in a string of unexplained attacks, including a blast this week that injured an American tourist in a plush hotel in the country’s commercial capital.

Investigations are proceeding into the motive behind the string of bombings that have killed at least two people and wounded four over five days in four different regions. Myanmar’s two biggest cities, Yangon and Mandalay, have both been hit.

The latest explosions struck Namkham, a town in Shan state bordering China, where ethnic rebels have been battling government forces.

“I don’t know if there’s any connection between these latest blasts and the incidents in Yangon and Mandalay,” a police official in the capital, Naypyitaw, told Reuters on condition of anonymity as he was not authorised to speak to media.

Local media said the Namkham blasts had killed one person and injured two, including a child. Reuters was not able to verify the information.

The government says the bombings seek to alarm the public and raise doubts in the international community that Myanmar, formerly known as Burma, can guarantee security when it takes the rotating chair next year of the Association of South East Asian Nations (ASEAN).

They add to sporadic outbreaks of violence in a year that has seen euphoria over democratic reforms launched by President Thein Sein give way to sectarian attacks in different regions.

In the most prominent attack, an American woman was hurt when a bomb went off late on Monday, apparently in a bathroom, in the 22-storey Traders Hotel in Yangon.

The U.S. embassy condemned the attacks on Thursday, saying they “had no place in civilized society”.

Police said four suspects had been arrested over bombings in Yangon, Mandalay and a third city, Sagaing, 20 km (12 miles) outside Mandalay.

But a man believed to have been behind an explosion in Tuangoo, 55 km (33 miles) outside the capital Naypyitaw, was still at large. That bombing killed two people.

“They confessed to carrying out these things because they were paid,” said the senior police officer, referring to the arrested suspects.

He gave no further explanation and asked that his name be withheld as he was not authorised to speak to journalists.

A senior police officer in Mandalay said information provided by those detained over the Yangon incidents had led to the arrest of a suspect in Mandalay, where an unexploded device was found in a restaurant. Another suspect was at large.

The same men were accused of setting off a bomb in a car park and planting a device in a Buddhist pagoda, both in Sagaing.

“We were able to identify them from the CCTV footage of the pagoda and the restaurants,” the officer said.

Myanmar is no stranger to bombings, but they have been rare since Thein Sein’s reformist government took power in 2011 after an election that ended 49 years of military rule.

Three explosions during a Burmese New Year festival in 2010 killed at least 10 people. In 2005, three bombs at a convention centre and markets killed 23, an attack blamed on ethnic minority rebels and an exiled political group.


Crisis averted, Obama tells Congress to get to work
Reuters / Phuket Gazette
PHUKET: President Barack Obama urged Congress to turn to matters like immigration reform on Thursday as Washington picked up the pieces from a destructive fiscal crisis that has slowed the U.S. economy and undermined the country’s international standing.

Less than 12 hours after he signed a bill that ended a 16-day partial government shutdown and averted a catastrophic default, Obama on Thursday said lawmakers must stop lurching from crisis to crisis and seek common ground on issues that also include farm policy and long-term budget issues.

“All my friends in Congress have to understand that how business is done in this town has got to change. Because we’ve all got a lot of work to do,” he said at the White House.

On Capitol Hill, Republican and Democratic negotiators held their first meeting to discuss the long-term budget fixes that have proven elusive over the past three years. The panel is supposed to reach agreement by December 13, but there are no guarantees it will succeed where similar efforts have failed.

Obama spoke one day after the Democratic-controlled Senate and the Republican-controlled House of Representatives passed a last-minute bill that will fund the government through January 15 and extend its borrowing authority through February 7, though the Treasury Department may be able to delay the day of reckoning for several weeks after that date.

The bill amounts to a clear defeat for Republicans, who had sought to tie government funding to measures that would undercut Obama’s signature Affordable Care Act.

That effort failed, and the standoff diverted public attention away from the administration’s sloppy rollout of the health law’s online insurance exchanges.

The fight split the Republican party into factions and left it on the wrong side of public opinion. Though Obama’s approval rating fell during the crisis, polls showed that most voters blamed Republicans for the standoff.

Republican Representative Tom Cole from Oklahoma, who will try to hammer out a budget deal with Democrats in the coming months, said it is time to move on. “We’ve had the fight,” he said on MSNBC. “Now it’s time to get down and identify the things we can agree on.”

U.S. stocks edged higher as investors returned to evaluating companies rather than Washington’s budget wrangling. The S&P 500 index fell as much as 4 percent during the standoff but is now nearly back to the record high it reached on September 18.

Hundreds of thousands of federal workers who had been idled by the standoff returned to work on Thursday. Vice President Joe Biden brought muffins to returning workers at the Environmental Protection Agency, while Agriculture Secretary Tom Vilsack greeted workers returning to the agency’s headquarters on the National Mall.

“I just hope we don’t have to go through this again in two months,” said Sandria Coombs, an EPA contractor.

What did she do during the shutdown? “Pray.”

Though federal workers will get back pay, the standoff is likely to slow economic growth in the fourth quarter from 2.5 percent to 2.3 percent with a high risk that it could slow even further, according a Reuters survey of 70 economists.

The last debt-ceiling fight in 2011 depressed consumer confidence for months and raised the United States’ borrowing costs by $19 billion over 10 years.

One possible upside: the turbulence could prompt the Federal Reserve to keep its massive monetary stimulus in place through n