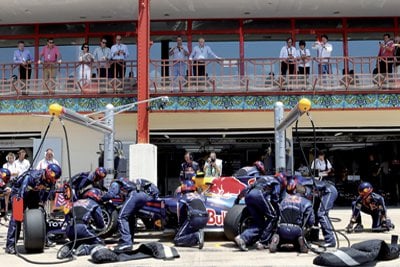 PHUKET: The European Grand Prix (EGP) was originally an honorific title for the Italian Grand Prix in 1923, followed by the French and Belgian Grands Prix.

In 1983, the F1 schedule was disrupted by a track cancellation three months before the event, and as a stopgap Brands Hatch was able to create an EGP in its place.

The success of the event, led to it returning the following year, however Brands Hatch was unavailable as it was hosting the British Grand Prix. So the EGP went to the foreshortened and unpopular Nürburgring circuit. Brands Hatch again hosted the EGP in 1985, but the race was replaced in 1986 by the Hungarian Grand Prix.

In 1990, a wealthy and eccentric Japanese businessman built an extravagant circuit called Nippon Autopolis to host an F1 race at the top of a mountain in a remote part of Japan.

In a gloriously Japanese way, the idea was that people could escape to a hilltop surrounded by natural forests, look at glorious works of art by van Gogh, Monet, Picasso and Renoir and watch motor races, with wealthy car owners able try the track.

The promoter turned up at the Monaco Grand Prix to convince Bernie Ecclestone that there should be a GP at the facility. He tried again at the Portuguese GP in 1992, where he was reportedly robbed of $250,000 of valuables from his hotel room. Despite all this, plans were made for an Asian Grand Prix in 1993 to replace the Mexican Grand Prix. Regrettably Autopolis was so remote, with hotels hours away by bus, plans failed to materialize.

Ecclestone quickly added the first and only F1 race ever held at Donington Park to the schedule, which brought back the EGP.

In 1998 the EGP was dropped, but it returned the following year when Nürburgring readopted the EGP name. It was removed from the F1 calendar for the 2007 season. From then on there would only be one GP in Germany, alternating between Nürburgring and Hockenheimring. However, the Nürburgring race of 2007 was renamed EGP due to a dispute over the ownership of the title “German Grand Prix”.

Since 2008 the EGP has taken place in Valencia, a semi-permanent street circuit in Spain. It has a contract to host the Formula One European Grand Prix for seven years. Disappointing attendances and further resistance to one country hosting two races led, in March, to the announcement that the EGP would be discontinued in 2013, with the Spanish Grand Prix alternating between Barcelona and Valencia. In April it was announced that the entirety of the Grand Prix at Valencia would be discontinued and any EGP would be elsewhere.

The circuit utilizes the roads skirting around the city’s harbor and America’s Cup port area including a section over a 460 ft swing bridge and includes some roads designed exclusively for racing purposes.

Called the “Other Monaco”, it is a track with almost no overtaking possibilities, and the outcome is likely to be based on qualifying and tactics.

Qualifying is something Vettel knows, and so does Hamilton. Could Grosjean be up there too? Find out on Star Sports.

Qualifying on Saturday, and the race on Sunday, both at 7pm, will be shown live at The GreenMan. Click here for more information.