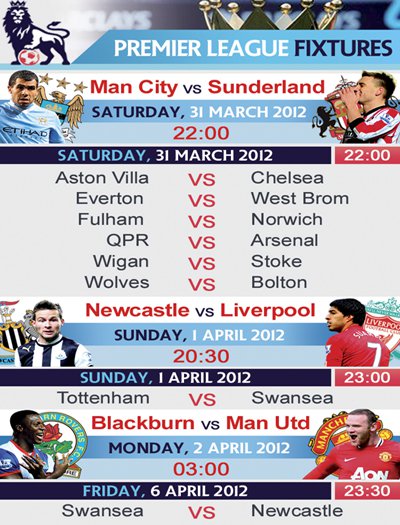 PHUKET: Chelsea’s Salomon Kalou gave the Blues a huge advantage in their quest to reach the UEFA Champions League semi-finals with an one-nil away win at Benifca.

Kalou made up for a dreadful miss early in the game to side-foot home Fernando Torres’ cross from close range.

Juan Mata had a shot come back off the post on the 60th minute and David Luiz cleared from his own goal line. Caretaker manager Roberto Di Matteo will look to complete the task on April 4, which will certainly assist his application for the job on a permanent basis.

Real Madrid will very likely join Chelsea in the semi-finals after their 0-3 demolition of Apoel Nicosia, thanks to Brazilian striker Kaka.

It is the first time a Cypriot outfit has reached the latter stages of the competition, however it looks like the fairytale ride is over.

Tottenham will face Chelsea in the FA Cup semi-finals to be held April 15 at Wembley after beating Bolton Wanderers 3-1 at home thanks to three second half goals from Ryan Nelsen, Gareth Bale and Louis Saha.

Adam Bogdan in the Wanderers goal kept the hosts at bay with a fine display until Nelsen headed home, then Bale doubled Spurs’ advantage.

The first semi-final in the cup also gives the independent spectator a derby match to relish, as Everton join Liverpool after their deserved 2-0 away win at Sunderland.

This weekend’s Premiership action pits Bolton in their relegation battle away to Wolverhampton. Realistically, anything less than a win for Wolves will most likely consign them to the drop after three seasons in the top flight.

QPR in their fight for survival will face local rivals Arsenal who have hit form at the perfect time in their quest for fourth spot.

Stoner riding for Repsol Honda recorded the fastest lap with a time of 1:38.78, an average speed of 161.376 kilometers per hour to complete the 4,428m track.

Commentators are expecting some close battles once the season starts.

The first race will be held at the desert circuit of Losail, Qatar starting at 10pm Phuket time next Sunday.

“He’s one of the greatest, I remember playing snooker with him and to clean the white ball he took his teeth out to mark the ball.”

BASEBALL: Michael “Magic” Johnson of basketball fame, leading a group of investors has been selected as one of the new owners of the LA Dodgers.

The bid of US$2 billion, if final approval is given, will be a new record price for a sports franchise.

“I am thrilled to be part of the historic franchise and intend to build on the foundation laid by Frank McCourt as we drive the Dodgers back to the front page of sports in our wonderful community,” Johnson said.

The Dodgers last won the World Series in 1988, their sixth championship.

Phuket Earth Hour – “I will if you will’