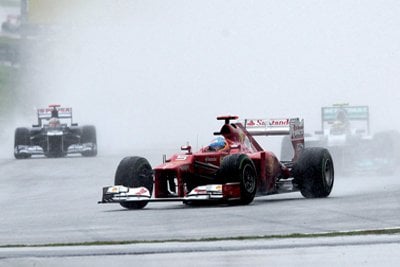 PHUKET: Formula 1’s second race of the season saw McLaren occupying the front two grid positions again. It was their race to give away again, and they did.

Lewis Hamilton held his lead into the first corner, followed by Jenson Button, the two Red Bulls and Fernando Alonso in the Ferrari.

Romain Grosjean tagged Michael Schumacher and both drivers dropped down the field before the race had chance to settle into a rhythm.

The Sepang Grand Prix is always run at a time, day, and month prone to monsoon rains on a track with laughable drainage.

Sergio Perez switched to “wets” on his opening lap, and was soon up to third in front of Mark Webber.

Alonso also switched during lap four and tucked in behind Webber. Sebastian Vettel was running well in seventh place.

The cars aquaplaned in the infamous Sepang swimming pool as the deluge continued and the race was stopped under a red flag on lap nine.

There they sat on the starting grid with at least one team praying hard for more rain.

By not changing to wets, Narain Karthikeyan had moved up to tenth, which for HRT was a record. If the race was called off now, they would get their first ever point (well, half point).

HRT did not benefit from the conditions and the rain eased enough to restart.

Hamilton stayed out and teammate Button pitted for intermediates whilst second in an attempt to get ahead of Hamilton. Instead he clipped Karthikeyan on his exit from the paddocks, to the dismay of both McLaren and HRT.

Hamilton and Alonso both pitted for intermediate tyres, and Massa appeared in the pits just in time to delay Hamilton’s exit from an uninspiring pit-stop sufficiently to lose him the lead and the race. It was Massa’s only significant contribution to the race.

It was now Perez, Alonso, Hamilton in the podium positions.

Perez pitted and returned to the racing-line in second, between the Prancing Horse and McLaren.

That was lap 15, and essentially that was that for the rest of the race. It was not in the script.

The Ferrari was ugly, slow, and hard on its tyres. It should not have won, but it did.

Perez in the Sauber got its best ever result, and Hamilton was jocular about his third place. He seems happy unless Button is ahead of him. Webber took fourth, Raikonnen came fifth for Lotus, and Senna brought Williams points at last by coming sixth.

Vettel and Button both tangled with Karthikeyan, and with Vettel’s failure to respond to his engineer’s instructions to retire and gain a free gearbox, came in a petulant eleventh place, falling behind Webber in the points.

Last year’s podium positions were Hamilton, Vettel and Webber. That looks unlikely this year with Red Bull not as commanding.

McLaren just has to stop throwing away points in the pits.

In the background is Bernie Ecclestone’s negotiations for the teams to continue in F1 by signing a new agreement. Mercedes is considering legal action it is rumored, but with the post race resignation of the Williams’ chairman, a vocal opponent of Bernie seems to have left the stage.