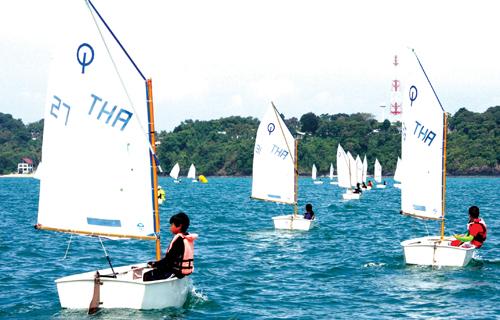 “There are limited competitive sailing opportunities for youngsters on Phuket, and so with Junior Phuket Raceweek we had the idea to provide a competitive racing experience for young sailors of any nationality,” said Byron Jones, managing director of organizers Media Business Services (MBS).

Royal Thai Navy Rear Admiral Prasart Sribhadung will be the Race Officer for the inaugural one-day event and will set up to six races, a combination of trapezoid and windward/leeward courses, for the multinational fleet of youngsters.

Since it was announced earlier in the year, Junior Phuket Raceweek has been well received by the local sailing community and has received strong support from two of the leading yacht clubs on the island, Ao Chalong Yacht Club (ACYC) and the Phuket Youth Sailing Club (PYSC).

Both clubs have established youth sailing programs, but are not limited to youth sailing only, each offering facilities and sailing opportunities for adults also.

Some of the more experienced and older kids from the two clubs are coming together to sail the 91.5 FM-Sunsail Youth Racing entry in the Cape Panwa Hotel Phuket Raceweek, including Phuket Youth Sailing Club member 16-year-old Akapoj Kankeaw (Tik), winner of the Optimist and Topper classes at the 2011 and 2012 Phuket King’s Cup Regattas, respectively.

The fleet for Junior Phuket Raceweek includes a lot of young sailing talent racing in two classes: Optimist and Toppers. The youngsters range from eight to 18 years of age with many relative newcomers to the sport who are excited to experience an international standard regatta for the first time.

At the other end of the spectrum are a number of sailors with considerable experience. Nattapong Yoangngam (Max) and Cartoon Juladej (Toon), despite being just 11-years-old, have competed in multiple Thailand National Optimist Championships, have represented Phuket in the Phuket Youth Games, and have also represented Thailand at the Double Star Cup Regatta in Qingdao, China last year.

“We’re very excited to have had such a great response for the inaugural Junior Phuket Raceweek, and to have received valuable support from the Ao Chalong Yacht Club and Phuket Youth Sailing Club. We’re sure the youngsters will have a great regatta and we hope to build on the inaugural event and make it even bigger and better for 2014,” added Jones.

Registration for Junior Phuket Raceweek will take place on Friday July 19 at Regent Phuket Cape Panwa between 1pm and 5pm, followed by an opening party. Racing takes place on Saturday July 20 off Panwa Beach Resort Phuket with an event-closing
barbecue hosted by the resort.

Phuket Raceweek is proudly sponsored by the Phuket Gazette, PGTV and the nationally televised ‘Phuket Today’ show on True Visions. ‘Phuket Today’, co-produced by PGTV and MCOT World, will be covering this event. The weekly half-hour show runs eight times a week, every week, on channels 99 and 58.