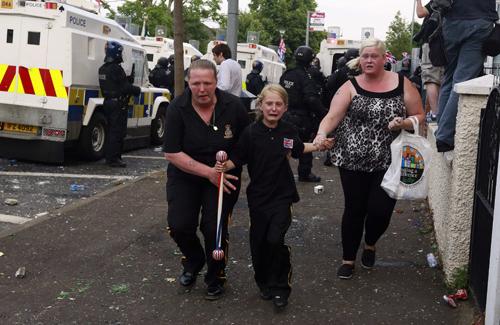 Pro-British Protestants march every summer in the British-ruled province, a regular flashpoint for sectarian violence as Catholics, who favour unification with Ireland, see the parades as provocative.

Since a peace agreement was signed in 1998, violence between Catholics and Protestants – which raged on and off for three decades – has largely ended. But much of Belfast remains divided along religious lines.

Extra police have been drafted in from Britain for the marches.

Tens of thousands of members of the Orange Order paraded at more than a dozen venues across Northern Ireland to mark the 1690 victory at the Battle of the Boyne by Protestant King William of Orange over Catholic King James of England.

One member of the police was injured in west Belfast on the boundary of Protestant and Catholic areas, and had to be dragged away by colleagues, a Reuters witness said.

“Police are dealing with serious disorder in the Woodvale Road area of North Belfast,” the Police Service of Northern Ireland said in a statement.

PHUKET: The assassination of a top Free Syrian Army commander by militants linked to al Qaeda is tantamount to a declaration of war, FSA rebels yesterday, opening a new front between Western-backed forces and Islamists in Syria’s civil war.

The announcement is the latest sign of disarray in the armed opposition to Syrian President Bashar al-Assad, who has regained the upper hand more than two years into an insurgency that grew out of Arab Spring-inspired pro-democracy protests.

It follows growing rivalries between the FSA and the Islamists, who have sometimes joined forces on the battlefield, and coincides with attempts by the Western and Arab-backed FSA to allay fears any US-supplied arms might reach al Qaeda.

Members of the Islamic State of Iraq and the Levant, a hardline Islamist group, killed Kamal Hamami of the FSA Supreme Military Council on Thursday. Also known by his nom de guerre, Abu Bassir al-Ladkani, he is one of its top 30 figures.

“We are going to wipe the floor with them. We will not let them get away with it because they want to target us,” a senior rebel commander said on condition of anonymity.

He said the al Qaeda-linked militants had warned FSA rebels that there was “no place” for them where Hamami was killed in Latakia province, a northern rural region of Syria bordering Turkey where Islamist groups are powerful.

Other opposition sources said the killing followed a dispute between Hamami’s forces and the Islamic State over control of a strategic checkpoint in Latakia and would lead to fighting.

The FSA has been trying to build a logistics network and reinforce its presence across Syria as the U.S. administration considers sending weapons to the group after concluding that Assad’s forces had used chemical weapons against rebel fighters.

The anti-Assad Syrian Observatory for Human Rights, which monitors the conflict, said the FSA and the Islamic State have had violent exchanges in several areas of Syria over the past few weeks, showing growing antagonism between Assad’s foes.

“Last Friday, the Islamic State killed an FSA rebel in Idlib province and cut his head off. There have been attacks in many provinces,” the Observatory’s leader Rami Abdelrahman said.

Two of Hamami’s men were wounded in Thursday’s attack, he said by telephone.

Syria’s conflict turned violent in the face of a crackdown on protests. Civil war ensued with disparate rebel groups taking up arms and the Observatory says more than 100,000 people have been killed.

U.S. congressional committees are holding up plans to arm the rebels because of fears that such deliveries will not be decisive and the arms might end up in the hands of Islamist militants.

Syria’s opposition bemoans the delay, and repeated on Thursday assurances that the arms will not go to Islamist militants.

PHUKET: At least six people died and a dozen were seriously injured when a train derailed and hit the platform at a station in central France yesterday, leaving several carriages torn and one lying on its side, officials said.

The train – a regional service that travels more slowly than France’s TGV express trains – veered off the track en route from Paris to the city of Limoges at the station of Bretigny-sur-Orge, 26 km (16 miles) south of Paris.

“The death toll is evolving constantly at this point and unfortunately it will probably rise,” Valls said.

National rail operator SNCF said the train, travelling just as many French families were heading off on summer holidays, was carrying around 385 people and that an investigation was under way into what had happened.

“We do not know the cause of the derailment yet,” SNCF Chairman Guillaume Pepy told reporters at the scene. The train was not scheduled to stop at Bretigny-sur-Orge but passengers told local media the train nonetheless appeared to be travelling unusually fast as it approached the station.

TV images showed one of the carriages smashed against a platform at Bretigny-sur-Orge station, 26 km (16 miles) south of Paris. Trapped passengers were still being helped to safety.

“Most of the people who suffered minor injuries have been taken care of. We are going to have to empty the carriages completely to see if there are victims or not,” said local lawmaker Michel Pouzol.