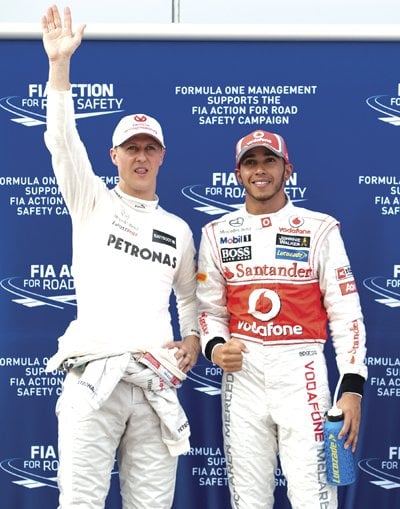 PHUKET: The big news last week was that Lewis Hamilton jumped ship after fourteen years with McLaren. I said a few weeks ago that I would be surprised and disappointed if he did so.

I’m disappointed, but was less surprised after watching, with a sense of awful foreboding, as his gearbox blew him from winner to DNF in Singapore. Hamilton is fragile and this incident helped, as the commentators noted, push him to Mercedes.

McLaren handled the negotiations badly with Hamilton’s managers XIX, who also moved Beckham from Real Madrid to the LA Galaxy. Parallels are clear, but while Beckham could rationalize a remunerative backwater for his autumn days, Hamilton is in early summer.

Is it a good move? The timing is awful.

Hamilton has to endure six races, during which, McLaren will isolate him from knowledge that could affect 2013. Niki Lauda, now non-executive chairman of Mercedes F1, is the opposite of Lewis Hamilton. Niki is a blunt no-nonsense fellow, whereas Lewis is “Master Cool”.

McLaren built the team around Hamilton, and Mercedes was built by Brawn with Schumacher. Hamilton will make more money, but at this stage in his career that is pretty academic. He will be in a car that will not win in 2013, when the McLaren could. If he does not win races, his popularity and self esteem could plummet.

Mercedes has won only one race in three years and has bet the ranch on the 2014 car. And now so has Hamilton.

Will Mercedes 2014 really outperform under the rule change that replaces the 2.4 liter V8 with a “greener” 1.6 liter V6 turbo? And remember, Bernie Ecclestone thinks the 2014 specification will be scrapped, saving 30 per cent of team budgets. Hamilton’s career might hang on this.

As a replacement, McLaren has taken Sergio Perez from under the nose of Ferrari, and that looks a good move.

There is circuit news too. Bernie Ecclestone has, in principle, agreed to a Bangkok Night Road GP (Grand Prix) with the Thai Government, but he is giving the New Jersey sponsors a hard time. The Fédération Internationale de l’Automobile (FIA) has approved the Austin Circuit, but France looks less likely to have a GP in 2013 as the government refused public funds.

Anyway, it’s on to Suzuka 2012, the only F1 circuit with a Figure of 8 layout; the back straight including an overpass above the out straight.

Turn 12 leads to the double apex Spoon Curve, the back straight and the infamous high speed 130R. The 130 meter radius turn starting after the Crossover has seen serious accidents and is often compared to Spa’s Eau Rouge.

Finally the Casio Triangle Chicane takes drivers back to the Start/Finish Straight. All of this makes rhythm critical to speed at Suzuka.

Expect a lot of three-stop strategies. Strategy will be critical, and since it is a difficult circuit to overtake, qualifying is very important.

Suzuka rewards excellent aerodynamics, so Red Bull will be thirsting for another Vettel win. Alonso has a habit of qualifying fifth, if he can repeat that, and work his way to a podium finish, he will not be unhappy. Button is a perfect Suzuka driver, smooth and clean, and McLaren will not now sacrifice him for a Hamilton win. And Räikkönen has a good package for the race. We are promised sun, but at Suzuka, you never know.

It’s not over yet!

The race is on Sunday at 1pm, and the practice is on Saturday at 12pm. It is shown live on the Big Screen at The Green Man, Chalong. Click here for more information.

‘Phuket Today’ soars up to prime time on UBC/True Visions