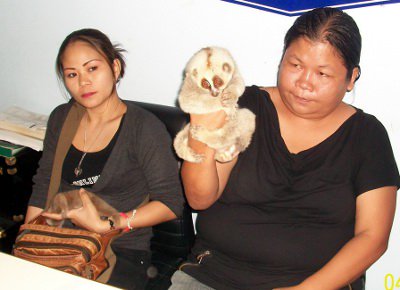 PHUKET: Environmental crime police and Phuket wildlife conservation officers are on the lookout for a man who escaped arrest with a gibbon last night after a raid on Patong’s Soi Bangla netted five touts charging tourists for taking photos with protected animals.

A team of officers led by Awat Nitikul, chief of the Environmental Conservation Unit based at Phuket’s Khao Phra Thaew wildlife sanctuary in Thalang, raided Soi Bangla at about 8:30pm.

Among his team were officers from the Phuket branch of the Natural Resources and Environmental Crime Suppression Division (NREC).

Each of the suspects was caught in the act of holding a slow loris for tourists to take photos with in Soi Bangla.

“They were all taken to Patong Police Station and charged with possession of a protected species without a permit, which carries a penalty of a fine up to 40,000 baht or up to four years imprisonment, or both,” Mr Awat confirmed.

“All suspects confessed to the charges against them,” he added.

Mr Awat explained that last night’s raid followed his office receiving a complaint from tourists saying that they were harassed by a group of people who were asking tourists for money for taking photos while posing with protected animals.

“We have received many complaints about this issue and we continually make arrests like this, but this time we found that there were more individuals taking part,” Mr Awat told the Phuket Gazette.

“While we were arresting them, the suspects tried to escape. One of them, a man with a gibbon, got away. We are now looking for that person,” he added.

Mr Awat told the Gazette this morning that his officers will take the slow lorises to a wildlife nursery in Phang Nga for rehabilitation.

“Anyone who sees a slow loris being used as a prop for photo opportunities for tourists on Soi Bangla – any anywhere else – can call me 24/7 on my private number 086-6897040,” Mr Awat said.